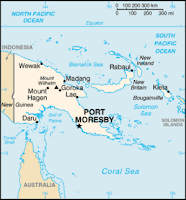 Numerous publications have carried news stories about Brother Taylor's ambassadorial posts including Rattler Nation, a blog of Florida A and M University, Brother Taylor's alma mater. Below, you can skip the 26-hour plane ride and visit Papua New Guinea virtually:
Posted by James Alexander at 9:59 PM