For Gamma Pi, UPLIFT Over the Holidays Means Thanksgiving Baskets and Christmas Toys


The Brothers of Gamma Pi have been on the move during the Holiday Season helping bring good cheer and tangible holiday gifts to some of Prince George’s County’s most needy residents in communities where the chapter has anchored much of its work. 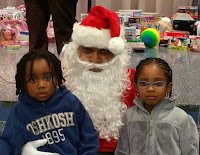 The work began on the Tuesday before Thanksgiving, November 24, with the delivery of close to 100 complete turkey dinners to seniors in the Windsor Crossing complex in Suitland, Md. Each dinner consisted of a 12-14 lb turkey, mixed vegetables, green beans, candied yam patties, and a sweet potato pie. The Brothers of the Super Chapter joined by Friendship Charities Foundation, the brothers from Lambda Gamma Gamma chapter and local students. You cannot imagine the looks on the faces of residents who answered the knock at their door to large packages of Thanksgiving meals ready-to-cook. Because the turkeys are purchased frozen, the two-day lead time is perfect for the seniors to prepare their Thanksgiving dinner. 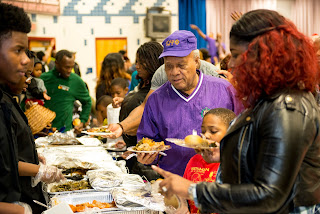 Precisely a week later, Gamma Pi Brothers helped get families ready for Christmas by sponsoring the annual Christmas Toy Drive for the Suitland community, held December 1 at  Elementary School. Again, Gamma Pi joined forces with Lambda Gamma Gamma and the Friendship Charities Foundation to give away some 100 toys for boys and girls between the ages of 3 and 13.

As many people know, Royal Purple and Old Gold are the colors representing Omega Psi Phi Fraternity, Inc. For this reason, the only red and white in the house was that worn by Santa Claus, who, as always, delighted the youth by making his list and checking it twice with the young children who shared their Christmas Wish Lists with him.Happy Holidays from The Super Chapter!!

(thanks to Brothers Don Cook, Tony Kelley and Raphael Terrell for the photos) 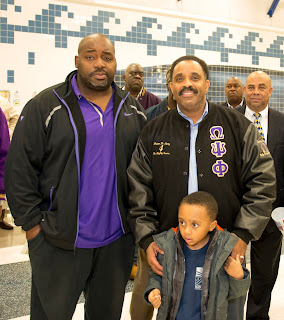 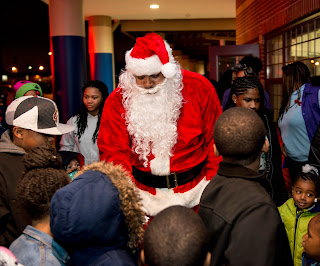