Every Brother in Omega Psi Phi Fraternity, Inc. draws a purple circle around November 17. For the uninitiated, November 17 is Founders' Day for this great Fraternity.  It is a time for every Brother to reflect back on the brilliance of the Founders and the charge they left with every member of Omega Psi Phi down through the generations, backed by the Four Cardinal Principles. For the public, Achievement Week is about recognizing the Uplift that Omega Psi Phi provides to the local community every day through individual and collective efforts, both seen and unseen.

This year, Gamma Pi's Achievement Week was worthy of a "purple circle" drawn around the entire week. Another year, yet another outstanding series of events by The Super Chapter, culminating in a standing room only communitywide Achievement Week program held Saturday afternoon at cozy Harmony Hall in Fort Washington. This year's theme was "Leveraging Our Collective Resources for Impact."

The program at Harmony Hall inspired, informed and ignited, a fitting close to a great week for Gamma Pi. Brother Richard Allison II led the afternoon as the official emcee, priming the audience for an afternoon of history, thoughtful messages and entertainment.

Brother Peter Harvey, Esq., the former Attorney General for the state of New Jersey, brought a thoughtful message to the audience about the deep meaning and purpose of Omega Psi Phi's founding in the context of social challenges faced today in the African American community. He deftly weaved together a number of issues and challenges that together represented a "call to action" for Omega.  For example, Brother Harvey reminded the Brothers and educated the audience that the Greek letters were not chosen "out of a hat" at random and the Four Cardinal Principles were thoroughly discussed and arrived at, and in the specified order in which they are presented -- Manhood, Scholarship,Perseverance and Uplift -- for a reason. Men of Omega, he said, are men who are ":called to action" and who are needed to address community issues today as when the Fraternity was founded.

Brother Harvey reviewed the meaning of  "a true Friend," another core aspect of Omega, by saying, "I define friendship this way: it's the people who will come see about you when it matters...they don't wait for you to stumble and fall, they come to lift you up."

Brother Harvey also used the occasion to challenge the Brothers of Gamma Pi and Omega to educate about and fight against domestic violence. He provided a moving scenario in which he asked the Brothers to think of two important women in their lives, and imagine them being assaulted at the hands of a man. At the end of his remarks, Brother Harvey revealed that he is working with a couple of professional sports leagues to develop personal conduct policies in light of recent high-profile media reports about domestic violence involving athletes. Brother Harvey drew a standing ovation.

While this year's event was a return to the traditional community program, it was anything but "run-of-the-mill," given the full house, the new venue, the impassioned message of the speaker and the energy of the audience. To read more about Brother Harvey's illustrious career in law and the Fraternity, read the preview article in The Gamma Pi Gazette: Achievement Week Preview

Youth talent was clearly on display during the program, thanks to the soothing sounds of the Surrattsville High School Choir under the direction of Brother Marcus Davis and the Charles H Flowers High School Jazz Ensemble under the direction of Brother Don DeMarco Myles. Both musical aggregations demonstrated the plentiful, rich talent that is alive and well in Prince George's County's schools.

A Special Week from Start to Finish

Ironically, the week began on Sunday, November 16, with a chapter visit to Pillar of Truth Baptist Church, the church pastored by Vice Basileus Bro. Tony Lee, the 2014 Omega Man of the Year for Gamma Pi. About 30 Brothers attended the service in Capitol Heights. Known for his humor and wit, Bro. Rev. Lee, referring to several Scriptural passages, stirred Omega souls with a message about the requirements of a Friend versus the requirements of a Brother. Brothers Lee and Harvey essentially gave bookend messages about Friendship and Brotherhood that allowed each to make complementary points. You can stitch those two messages together like fabric and Gamma Pi Brothers received a dynamic challenge for Achievement Week. It could not have worked out better as the starting and ending points for Achievement Week.

In between the beginning of Achievement Week and the end of it, Gamma Pi had a contingent of about 50 Brothers to go to the Rededication Ceremony at Howard University on Founders' Day, November 17. As always, Gamma Pi represented well, having one of the bigger chapter aggregations at the Rededication ceremony.

The Super Chapter also hosted about 80 Omega men from in and outside the chapter for its popular annual Omega Brothers Only Dinner at Andrews Air Force Base on Friday night, November 21. Gamma Pi's Brother Rodgers, the Grand Keeper of Records and Seal, brought a powerful personal message about how you get from Omega what you put into it, using his own story about making the tough transition from college to the graduate level after initially being disengaged with the Fraternity. He described the inner satisfaction of returning to the fold after initially being away for a brief period, now since remaining forever engaged and committed, realizing how much he had missed the fellowship of being among Brothers. Clearly, he has embraced the full meaning of brotherhood having been elected to a Supreme Council post.

Just a year ago, Gamma Pi celebrated its 40th anniversary Achievement Week with a stellar, first-class, star-studded formal dinner program that paid homage to the chapter's history and lineage. While  the overarching story line last year was about Gamma Pi turning 40, this year it was about the chapter's greatest accomplishment in Omega -- electing the first Grand officer  from Gamma Pi to the Supreme Council of Omega Psi Phi, in the person of Brother Rodgers, who is also a past three-term Basileus for Gamma Pi and the former two-term Second District Representative.

Truly, the Super Chapter has come a long way and is on track to go even further as one of the shining lights of Omega. Achievement Week was a great time to recognize that accomplishment and emphasize the message of seeking even higher heights for the future for Gamma Pi.

Posted by James Alexander at 2:27 PM No comments:


The Que Kidz event on Saturday, October 18th was GREAT! There were a total of 20 kids that took part in the Social Action Program. The morning started with prayer and a hot breakfast prepared by Brother Daryl Thompson. The kids enjoyed oatmeal; waffles/French toast sticks, fruit, and milk. During breakfast Brothers engaged the kids in conversation regarding the “Top Ten Table Manners” and current events. The “Top Ten Table Manners” discussed with the kids were:

1. Chew with your mouth closed;2. Avoid slurping, smacking, blowing your nose, or other gross noises. (If necessary, excuse yourself to take care of whatever it is you need to take care of);3. Don’t use your utensils like a shovel or as if you’ve just stabbed the food you’re about to eat;4. Don’t pick your teeth at the table;5. Remember to use your napkin at all times;6. Wait until you’re done chewing to sip or swallow a drink. (The exception is if you’re choking);7. Cut only one piece of food at a time;8. Avoid slouching and don’t place your elbows on the table while eating (though it is okay to prop your elbows on the table while conversing between courses);9. Instead of reaching across the table for something, ask for it to be passed to you; and
10. Always say ‘excuse me’ whenever you leave the table.


The kids really enjoyed the discussion of how to conduct themselves with proper manners during their meal. After breakfast we broke up into several groups to participate in solving various crossword puzzles, math puzzles, and memory games. As we distributed the puzzles and memory games, we discussed with the kids the importance of exercising their minds. Brother Prince and Belle explained that these games helped them utilize their reading, math, and spelling skills along with strengthening their memory capabilities. It was a joy to see the kids’ excitement while they played these challenging games.

The next activity was teaching the kids the fundamentals of basketball. With basketball season around the corner, we figured it would be great to give the kids a head start on improving their basketball skills. During this activity, Brother Orlando McDowell, Michael Salley, and Terrence Prince taught them the proper way to dribble, pass, and shoot the basketball. After going through the basic drills, we assembled the kids into age appropriate teams (purple team vs.gold team). They really enjoyed running up and down the court competing against each other. Not sure which team won, but overall, they had fun and exercised.


After basketball, we broke for lunch. Brother Thompson prepared a healthy lunch, which consisted of grilled chicken, pork chops, steamed vegetables, mashed potatoes, fruit, and tea. The kids really enjoyed the lunch, even to the point of requesting second and third helpings of the delicious meal. They even displayed some of the “Top Ten Table Manners” they learned earlier that day. See more photos below: 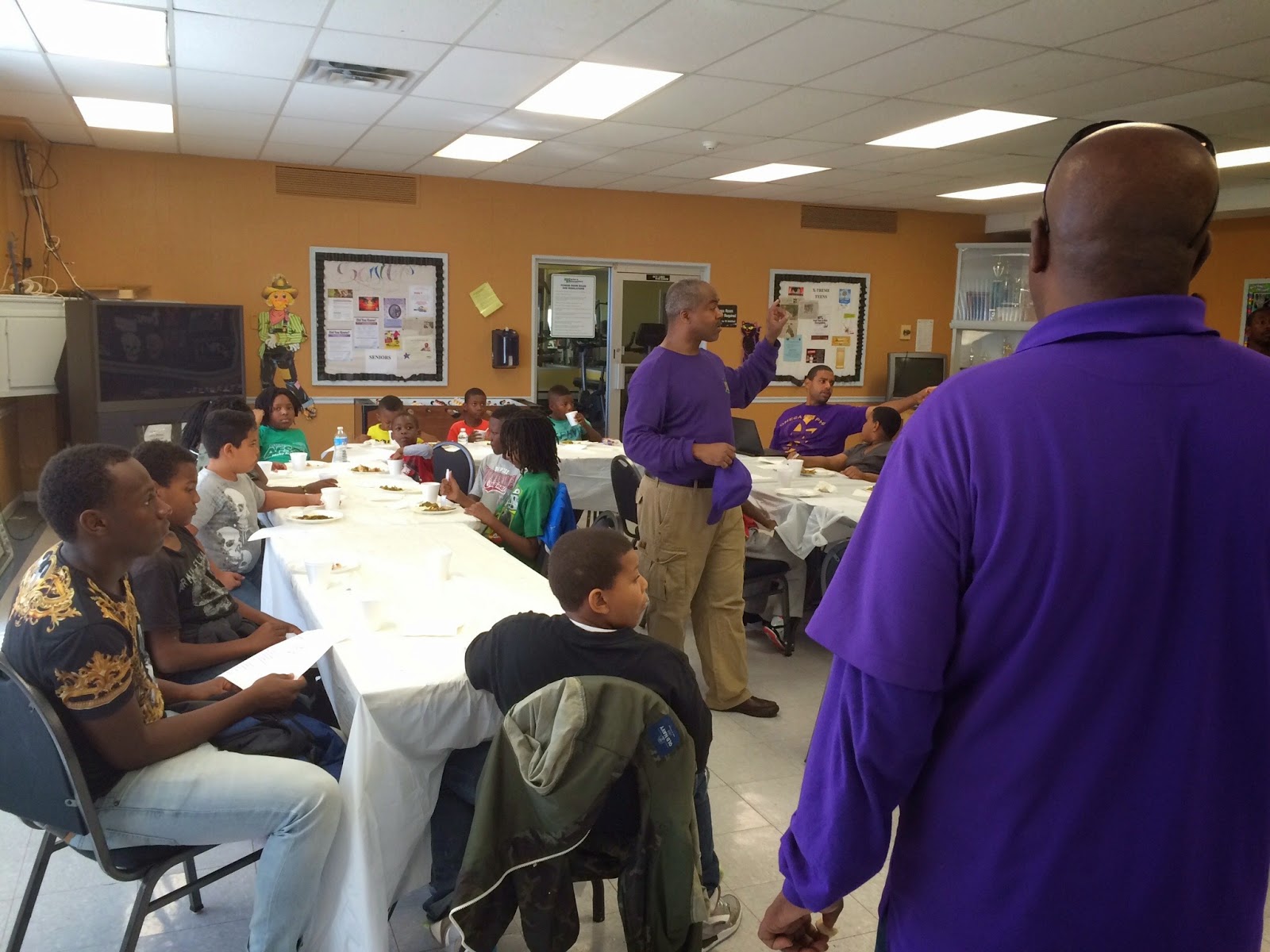 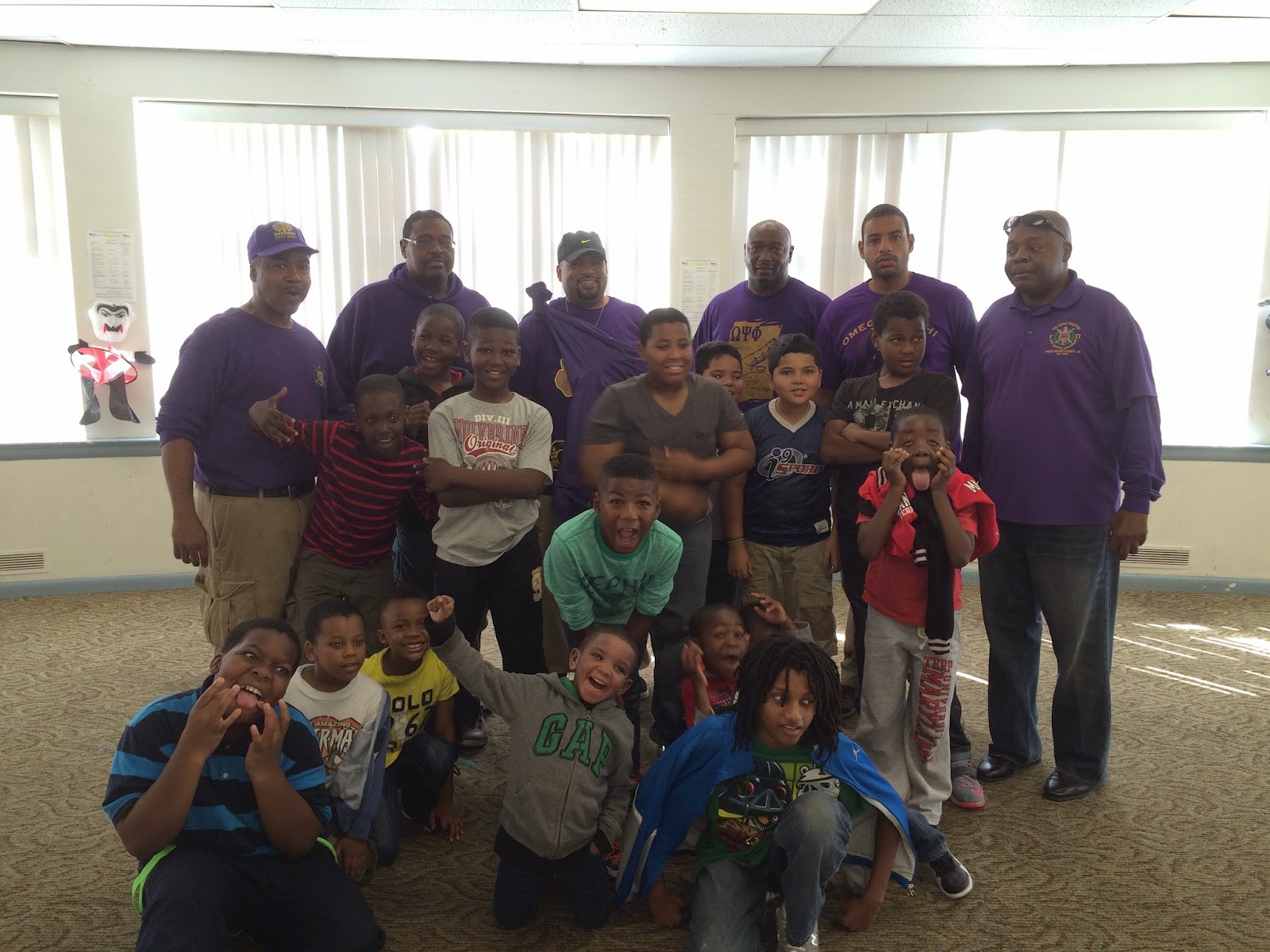 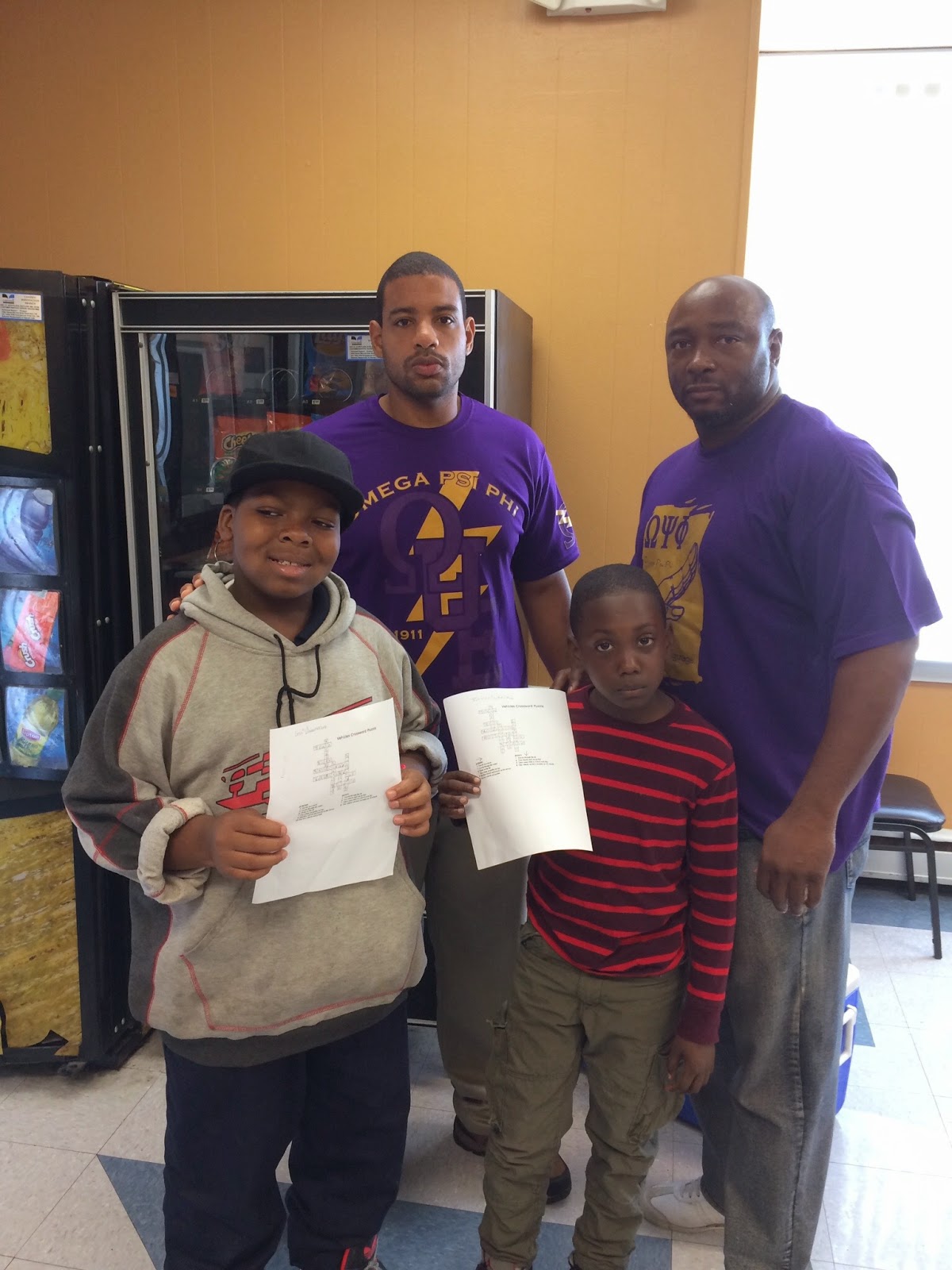 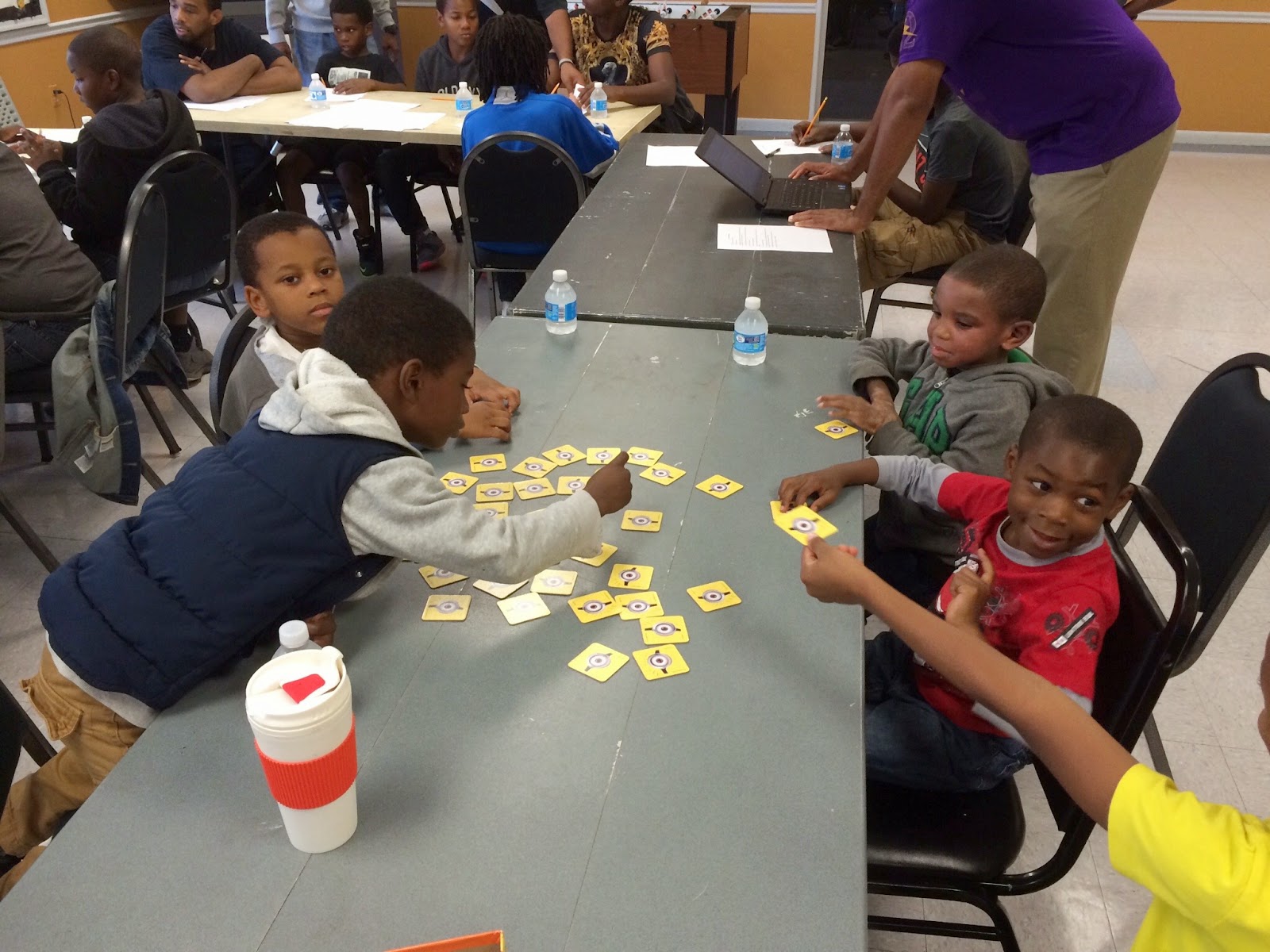 Posted by James Alexander at 6:25 PM No comments: