While racking the brain trying to find the first candidate for excellence, eventually I came to realize that the best place might be to start from the bottom up. By the bottom up I mean a fresh face, untapped potential, a diamond hidden in the rough if you will. Yes, this best describes TSU’s freshman class who just recently entered their second semester. In such a short amount of time, a plethora of students have begun to lay the foundations of excellence in leadership, academia and athletics.

The search led me to Kirsten Beverly. Though officially classified as a sophomore, Beverly first stepped onto campus this past August, along with many others. Hailing from Clinton, Maryland, the young woman came prepared to take the world by storm.

“Of course I was nervous moving so far from home, but regardless, I had to remember why I was here,” said Beverly.

As a student at one of the few schools that offered a dental hygiene program, she was more than excited to take on anything that her professors threw at her.

“By working towards becoming a member of the dental hygiene program, I can gain much needed hands-on experience which will be helpful when I enter into dental school,” Kirsten commented, “It will be more than beneficial since I hope to become a pediatric dentist for low-income families and children with special needs.”

When asked about her accomplishments both in and out of the classroom, she first mentioned her role as the freshman class treasurer, a position of SGA and a coveted spot on the Dean’s list in her first semester. But after a little more digging, it was also discovered that she was a new recipient of the Girl Scout’s GOLD award, the highest achievement presented by the organization that prides itself on its community service.

The short interview concluded with one final question: What advice would you have for your peers and those that will make up the class of 2020?

Her response was surprising yet oddly refreshing.

“College is one of the few times that you can be completely selfish. Take advantage of it and take risks. Chase every dream you have because this is the time to do it. Never be afraid of the world. Know and remember that rejection is not a dead end. That’s what I wish I knew coming in.”

Posted by James Alexander at 10:50 PM No comments: 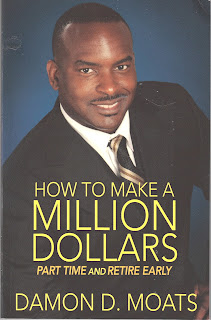 If you knew how to make a million dollars working parttime and have enough to retire early, would you tell anybody? Yes, if you had the winning formula. Brother Damon Moats has the winning formula and did just that recently in writing his new book, How To Make a Million Dollars. The 1350-page tome is now firmly in circulation and Brother Moats is happy with the early returns and looking for more as the book gets more notice and readers share their sales are going. Bro. Moats, (Psi Psi '85, Kentucky State University), is an expert in real estate and in network marketing.

"This book can be a road map to your success and financial freedom, should you choose network marketing or entrepreneurship in general as one of your paths to wealth and riches," Brother Moats says in the back page liner notes of his book.

Brother Moats recently provided a Q&A interview with Gamma Pi LIVE to share his latest project with brothers far and wide. Below is the transcript of that interview.

Q Brother Moats, is this your first book?
A -Yes it is. This is my first book.

Q- When was your book published and who is your publisher?
A - Yes it was published in 2015. The publisher is Create Space/Amazon, The book is available at this link on Amazon, and I encourage all Brothers and their extended family and friends to read it:

Q Why did you write the book?
A- I wrote the book because network marketing/direct sales is an industry that I have participated in over the past 25 years with great success. I also believe that understanding and operating within the industry can deliver so much wealth to a person or a family.

Q -What would you like to see come out of the book?
A - I would like for the book to become a resource to those not very familiar with the industry to gain a measure of understanding and appreciation for the business. I would like for the book to become a resource for those who have engaged in the industry but have not had much success financially in the industry but after reading the book and being willing to do the work in the book, find that they then enjoy great financial success in the industry. And finally, those that have had a tremendous amount of financial success to find the book valuable enough to recommend to distributors on their teams as a resource to help them build their businesses.

Q- What kind of reaction have you gotten from the book?
A- I am excited that the response from the book has been overwhelmingly positive and many have said that they are using it currently as a resource to build the businesses they building now.

Q -What sparked your interest in network marketing? That seems to be a real expertise and a point of the book that sets it apart from other books about "making a million dollars."
A - I discovered network marketing when I began to search for a franchise opportunity and an entrepreneurial opportunity only to realize that I just simply did not have the capital to purchase the average franchise and it didn’t appear that I was going to be able to accumulate the funds anytime soon.

Q - Speaking of setting yourself apart from other "make a million" authors, what is different about your book?
A - The difference about my book is that I don’t just tell the good side of the story, I tell the good, the bad and the ugly about the industry and the reader gets to make up their mind if the good outweighs all other aspects of the business to determine if it is an industry they should pursue. I’m told, this book, if followed, will yield a financially successful network marketer. But just like all else, many people decide that this industry, just as getting a graduate degree, may be more than they are willing to fight for. However, the individuals that do make the book their guide will far out earn others who don’t.

Q. What message do you want Omega men to take away from your book?
A. There are several things I would like Omega Men to take away from my book. 1st, I would like to suggest that each Brother start writing a book of there own in their 20’s. If they are passed that age, please start now. All of us have a story to tell or a vision to share which is valuable to others, whether we believe that or not. Secondly, I would like to encourage each Brother to try entrepreneurism in some form or fashion, as soon as possible. Finally, I would encourage each Brother to collaborate with another Brother, collaboration makes it easier for each individual to succeed at whatever it is they are endeavoring to do or accomplish.
>
Posted by James Alexander at 11:29 AM No comments:

For the men of Gamma Pi chapter, nothing could be more about Scholarship and Uplift than reaching out personally to young students in our middle and high schools. Whether through the chapter’s flagship educational program, Project ENRICH, or through request by local schools for the men to come do Career Day or to talk to young black males about success and achievement, the chapter relishes such opportunities. Gamma Pi combined those opportunities over the holidays when it participated in a local high school Career Day and also sponsored the annual Career Showcase during a recent Project ENRICH Saturday.

The first event was held on December 3, when a contingent of Brothers from The Super Chapter visited with students at the high school level at in Upper Marlboro, for a “Career Day” presentation. With a group of Brothers representing a diverse group of career backgrounds, from education to business to government, law and medicine, the Super Chapter has an excellent stable of men who all serve as positive career role models for today's students.

Among those presenting was Brother Anthony Stewart, Chief Executive Officer of Stewart Financial Services.  Brother Stewart is a statewide business star, having been named one of 's Most Admired CEO's last summer by The Daily Record, a business and legal publication.  His focus was relaying to the students how he developed his financial and entrepreneurial expertise, encouraging them to aim higher in the same vein. The young students also heard from chapter members who are experts in veterinary medicine, sale and marketing, education, real estate and business and other entrepreneurs.

Right after the holiday, the Brothers kicked off the New Year with the annual Career Showcase sponsored by the chapter’s Project ENRICH program. Held at once a month, the program helps prepare students and families over a four-year period (ninth through 12th grades) for careers in college. On January 9, the chapter organized the annual Career Showcase. Several professionals from the community joined with Fraternity members in presenting a half-day look at various career options and the educational requirements for those jobs.

The Project ENRICH students heard from an actuary, a health care services administrator, an FBI special agent, an IT Auditor for the Federal Reserve Board, a management consultant and a forensic psychologist. As exciting as the various careers sounded, it was all about preparation. What courses do you take in college? What do you do in high school to get prepared? How much money can you earn? How many years of schooling are required to enter various career fields? How much travel is involved?  How do you get internship experience? Brother Willie Hines is director of the program.

“When it comes to our young people and the Cardinal Principle of Scholarship, nothing could be more important than helping guide the talents and interests of our young people into productive, well-paying careers,” said Gamma Pi Basileus Brother Brian K. Long. “Ultimately that is the goal we all share in promoting Scholarship not only in Gamma Pi, but in the entire Fraternity.”

Posted by James Alexander at 11:28 AM No comments: