The Brothers of Gamma Pi closed the books on the 2018 Achievement Week observance on Saturday night, November 17, at the annual Rededication Service held at Howard University's Crampton Auditorium, buoyed into the 108th year of the Fraternity by the powerful challenging words of "not satisfied" from Bro. Mark Jackson, the Grand Keeper of Records and Seal.

About 50 Gamma Pi chapter members rolled up U Street Washington, D.C. in a Que car caravan -- direct from the November monthly chapter meeting -- to attend the service. The Gamma Pi Brothers were part of a full house of about 1,000 Fraternity members who came from near and far to the program, some by chartered bus.

Gamma Pi put on a spirited Achievement Week of its own, making the Howard program "icing on the cake." Friday night, November 16, the chapter hosted 100 Chapter members and Fraternity guests for the annual Robert Busby/Claudius Brothers Only dinner at Martin's Camelot. It was the first time that Gamma Pi had held the dinner at the plush location. Immediate Past Grand Keeper of Records and Seal Bro. Kenneth Rodgers, a Gamma Pi legend, offered the inspirational words of "unity" at the dinner. Brothers enjoyed a free-form fellowship afterwards. It was one of the best Brothers Only dinners in recent memory, from the atmosphere to the succulent food to the Brotherhood to the message of the evening.

On Monday, November 12, when Veterans Day was observed, the Social Action committee led a contingent of Omega men who gathered at the P.G. House Men's Shelter in Capitol Heights to deliver suits and shirts to the residents. Marching up to the facility in single file, with the clothes in their possession, the Gamma Pi men were met with enthusiasm and appreciation from the shelter manager on duty. Brothers delivered a total of 35 suits and two dozen shirts to the shelter.

For Gamma Pi, Achievement Week kicked off on Saturday, November 10, with the chapter's annual communitywide awards program held at the Ernest E. Just Middle School. It was a full house audience that witnessed the bestowing of awards to the following community leaders and chapter members. Bro. Anthony Stewart served as emcee.

In addition to the awards, the program was highlighted by an insightful and riveting keynote speech by Bro. Theodore "Ted" Johnson, a former Gamma Pi chapter member who is a nationally known commentator on social justice issues, and by the soul-stirring renditions sang by the Gamma Pi Chorale, under the leadership of Bro. Alan Stewart.

Earlier in the day, the Social Action committee organized a Veterans Day program for youth in the Kentland community. The event featured military veteran Omega men sharing their experiences and explaining their role and the impact that African Americans have had on the U.S. Armed Forces.

Congratulations to Brother Teddy Taylor and the Achievement Week committee for an exciting and challenging week. Brothers who engaged in the week's events clearly felt re-energized after an uplifting series of activities. 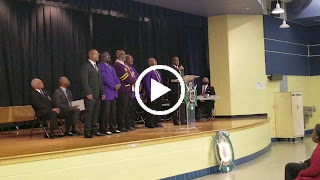 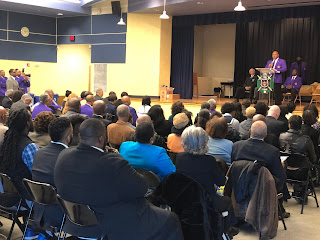 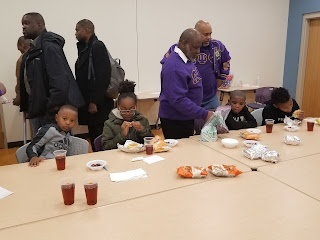 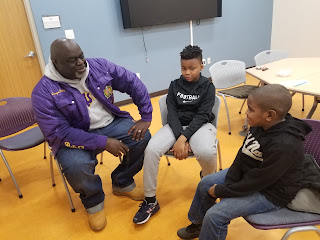 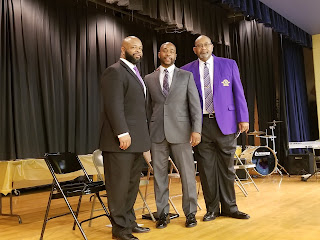 Posted by James Alexander at 9:34 PM No comments: