On Saturday morning, July 21, the raindrops were falling hard in the metro area as a week of off-and-on storms were cooling down recent extreme heat. In the spirit of true Omega men, the Brothers of Gamma Pi chapter effortlessly turned to "Plan B" when a steady downpour put a damper on a live demonstration of motorcycle and bicycle safety rules using real motorcycles. The bikes would have been driven to the Kentland Community Center where the Que Kidz Daze meets.

"Plan B" was an indoor interactive safety lecture that turned out to be just as much fun to the more than 30 young boys and girls gathered for the July session of Que Kidz Daze. Only one motorcycle (instead of several) was brought to the premises due to the weather, but the kids still had big fun as they always do on Que Kidz Saturdays. Brother Orlando McDowell leads Que Kidz Daz which provides monthly enrichment activities for underprivileged youth in the Kentland area on Saturday mornings.

Brother Don Norwood, a motorcycle enthusiast and president of the Ebenezer AME Church's Anointed Horsemen Motorcycle Ministry (Fort Washington, MD.), led the presentation. "Show me a left hand turned, everybody...Now how do you signal a right-hand turn,?" Brother Norwood said during his talk, as the kids extended their arms all the way out to signal the left hand turn, but some of them missed the ":trick"of the right hand signal by extending their arms all the way to the right rather than the "L"-shaped signal with the left hand to indicate right turns.


The Brothers used motorcycle safety laws as a context to discuss bike safety laws with the youth. For example, other topics included what side of thee road to ride on, what age to be on the sidewalk instead of in traffic, how to properly wear protective gear like a helmet and padding, the ABC's of safety checklist and traffic laws.

Brother Clint Green, who is not a member of the Anointed Horsemen,  was the only one to brave the elements and maneuver his bike to the event (see photo). And just as soon as it appeared the rain had stopped, as the kids prepared to head outside to examine Brother Green's bike as part of the safety lecture, the downpour returned and the Que Kidz Daze contingent remained inside. Read more about Que Kidz Daze on Gamma Pi's web site. Below are some video clips from Saturday:


Posted by James Alexander at 1:20 PM No comments: 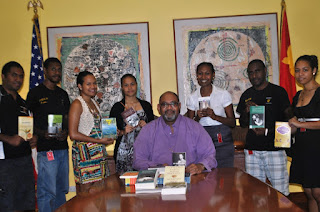 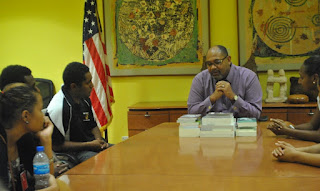