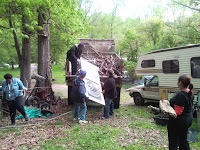 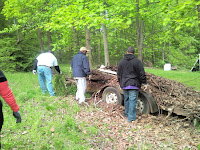 When the small contingent of Brothers walked into the house at 6501 Woodland Road in Suitland early Saturday morning, it was Christmas for the owner -- as in, "Christmas In April." Gamma Pi lent some much-needed manpower to efforts to improve the home that was in vital need of repair as part of the annual commitment that the chapter makes with sweat equity to the countywide Christmas in April project.
The home was identified for the project by Christmas in April officials and is occupied by a female senior citizen and some other relatives, including a son. The small frame house sits way back off the road and needed work inside and out including in the spacious front and side yard. Brothers experienced in Christmas in April work remarked that it was one of the toughest challenges they had seen compared to previous homes served by the project.
In addition to about a half dozen Gamma Pi participants, a team of professional carpenters along with women from the Bowie-Mitchellville chapter of the National Council of Negro Women joined forces on the home.Work began around 7 a.m. and ended in early afternoon.One of the biggest tasks involved pitching several loads of trash and debris (large car parts, old aluminum siding, thick underbrush, old appliances, assorted junk) aboard a county dump truck for trips back and forth to the landfill.
"The (house) Captain was very impressed with the usual hard work we put in to gentrify one of Suitland's urban homes," said Brother Tony Kelly,who coordinated the project for Gamma Pi's Social Action committee. One of the sons was so overwhelmed by the work that he went around and personally thanked each project participant with tearful eyes and a hug. In an unusual twist, he even spent much of the day working alongside the Brothers and the other Christmas in April participants. He did not just sit and watch. Enjoy the photos and videos provided by Brother Kelly and bythe PR Committee from yesterday's very successful event:
Posted by James Alexander at 2:44 PM No comments: 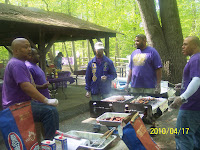 Posted by James Alexander at 7:32 PM No comments: