It could very well have ended up being a bad year for Gamma Pi Chapter's Project ENRICH program. In fact, it could easily have been written off as a lost year, what with the global pandemic, the 40 million Americans on the unemployment rolls and more recently the coast-to-cost protests over police brutality, all taking place just since March. But for Project ENRICH, the challenging 2019-2020 year will go down as anything but "lost." This may have been the program's best in its 40-plus year history. Project ENRICH survived a multitude of unforeseen hurdles to complete the year.

The success of the 2019-2020 version of Project ENRICH was evident in the closing program held today in the same virtual venues where the rest of the world is meeting these days due to the pandemic  -- in a ZOOM video-conference. The venue may have been virtual but the success of Project ENRICH was -- and is -- real. Students, parents, family, Gamma Pi Chapter leadership and members all joined to salute the students who participated in the year-end program. Project ENRICH is normally held Saturdays once monthly in-person on the Bowie State University campus.


The students were the real stars of the closing program. From freshmen and sophomores talking about what they were getting from the program to juniors talking about "stepping up" to seniors looking ahead to college after four solid years of Project ENRICH, the student experiences was quite encouraging.

YOU CAN CATCH ALL THE STUDENT PRESENTATIONS AND INDIVIDUAL STORIES BY WATCHING THE RECORDED ZOOM OF THE PROGRAM.

Words of Wisdom
"You are the next leaders we are aspiring leaders to, here in our country," said Bro. William Reese, who as Assistant Director is one half of the husband-wife team helping director Bro. Willie Hines run the program. This is Bro. Reese's first year with Project ENRICH.  He also developed a new program for Project ENRICH's young men, called MSPU: Manhood-Scholarship-Perseverance-Uplift. The centerpiece of this effort was monthly candid conversations led by him and other Brothers about real life and manhood.

Gamma Pi Basileus Steven Walls  was also among those who addressed the group early in the program, saying "If each of us were to write down  a definition of  successful Project ENRICH participant and graduate, the most common themes would be dedication, perseverance, integrity, conscientiousness, dependability and hard work. The one that should get top billing to me is winners - you are all winners."

At the end of the program, Project ENRICH director Bro. Willie Hines looked back on a difficult but productive year. "Our Project ENRICH 2019-20 year culminated with a closing program that was a moment that captured Project ENRICH’s past, in our alumni; present, through our graduating seniors; and the future, thanks to our returning students next year. Our closing program highlighted the leadership, innovation and persistence of Project ENRICH staff. Despite the pandemic and political-social unrest, our students persevered and demonstrated the standards that exemplify Project ENRICH.".

Reflections from Staff and Others
Project ENRICH's other staff, the team leads, used the opportunity to highlight their groups' achievements: Bro. Jason Crump (freshmen), Bro. James Riley (sophomores), Bro. John Howard (juniors) and Bro. Andrew Clarke (seniors) all led their classes from beginning to end. "One of the moments that from this year that stood out for me is our discussion about the inequities involving  black and brown students," said Bro. Howard in saluting his group, pointing out how that topic ironically is relevant to current events. The junior class, he says, contains students who have expressed career interests as pilots, orthodontists, engineers, nurses, teachers, accountants, entrepreneurs, pediatricians, chemists, lawyers and architects.

Other advisors are Bro. Brett Blake and Bro. Kelly. Also, Rita Reese, spouse of Bro. Reese, this year joined the program to initiate a new effort that identified and advised about special concerns unique to young black women, called I-N-S-T-A-G-R-A-M.  She reviewed the first-year progress of that program. Parent Club president Joe Jenkins also formally thanked parents for their support, as well as encouraged the students.

The keynote remarks were given by two speakers this year in an attempt to try a different approach that would appeal best to the students. Two speakers were chosen from other Divine Nine organizations -- Keila Foster, Ph.D., from Delta Sigma Theta Sorority, Inc. and William Etti, Ph.D., from Kappa Alpha Psi Fraternity Inc. In a tag-team fashion, Drs. Foster and Etti inspired the students through getting them to consider how to craft and deliver the best of themselves to a changing world badly in need of new ideas and energy. Dr. Etti's message revolved around being prepared to meet "struggles and failures" and Dr. Foster gave them questions to consider to visualize their lives.

Trouble Could Not Have Come at a Worse Time
Project ENRICH began meeting virtually in April, which in many respects, came at the worst possible time for the program. April is always the month that the essays are presented. Students actually stand before a live audience and make their presentations and respond on the spot to questions about the subject matter. But in a twist of creative genius and Perseverance, Project ENRICH, led by Bro. Hines, looked to technology rather than cancel the essays given how hard students had worked to prepare. Subsequent monthly meetings including the closing program have been held on Zoom.

While the closing program is essentially a year-in-review event to recall progress and achievements, it is also designed as a farewell to Project ENRICH seniors, who are all heading off to college after four years in the program which they must start as ninth graders.

Nobody can predict the future when it comes to the pandemic, the economy or the racial strife tearing at our country. But for Project ENRICH, next year is guaranteed to get off to a great start giving where the program was able to leave things this year through pulling together in an unprecedented way. It could have been worse. 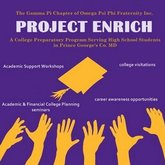 Posted by James Alexander at 11:30 PM No comments: