Back To School with the Brothers of Gamma Pi

As the summer dog days drags to a close, it is a time of year that most young kids dread -- the return to school. The laziness of summer and its carefree days are practically over. But one thing the kids in the Kentland Community do not dread this time of year, and that is seeing the Brothers of Gamma Pi Chapter of Omega Psi Phi Fraternity, Inc. for the annual Back to School Backpack Drive.  On Saturday, August 25, Gamma Pi once again made it an affair to remember.

Th Super Chapter donated more than 60 backpacks to Kentland students during Saturday's event. A team of about 30 Brothers joined Basileus Tony Lee and Social Action Chairman Kevin Greenwood at the community center for the daylong giveaway. In addition to book bags, the students and their parents were able to select form an array of other supplies like pens, pencils, binders and notebooks. The supplies were provided to Gamma Pi to give to the students by its partner, Friendship Charities Foundation, Inc.

"This is why we do the work that we do, to see the smiles on the faces of these youth and their parents. You never know when you may be providing supplies for a future doctor, lawyer or scientist," said Basileus Lee.

“It is very important that our children start out their school year on the best possible footing. Unfortunately, many do not have the resources to have a new backpack, writing utensils, folders or any of the essentials they will need to start the school year on a positive note," said Social Action chair Greenwood. "There is no greater feeling than to see how happy and excited the students are when they receive their “back to school” items. The Men of the Omega Psi Phi Fraternity, Inc will always put our best foot forward to help the youth in our communities across the world. This is what we do!”

The event included a moon bounce, martial arts demonstration,dancing exhibition and the crowd-smashing hop routine by Gamma Pi's Kevin Ford, Jr., David Jackson and Ben Greene. By the time they were done, many of the young and old in the audience were trying to emulate them with their own "hop" moves.
The weekend Back to School event featured several other service organizations, including a local chapter of the Zeta Phi Beta Sorority and a foundation of the Delta Sigma Theta Sorority. All the participating organizations were lined up along the outer walls of the gymnasium with their exhibition tables.

Gamma Pi has a long history of involvement in the Kentland community, having operated the chapter's Que Kidz initiative there for several years until recently when a leadership change occurred at the facility. Residents of the community still know and respect and look forward to Gamma Pi coming to the neighborhood and it showed in the crowds and activity that The Super Chapter attracted to its table.

Gamma Pi broadcast much of the event on Facebook Live. To watch the rebroadcast, go to www.facebook.com/gammapichapter. 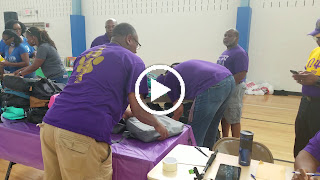 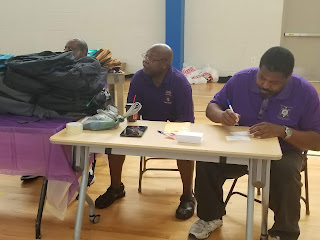 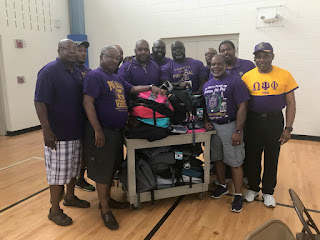 Posted by James Alexander at 12:15 AM No comments: