It's been some years since their exploits on the baseball diamond and the football gridiron. But now it is assured that the accomplishments of Gamma Pi Brothers Anthony Stewart and John Morgan, Jr.. will never be forgotten. They are immortalized as newly minted members of the Bowie State University Athletic Hall of Fame.

These Brothers were among  16 stellar athletes, athletic leaders and one team who were honored at a special program on May 4 at the school's Fine and Performing Arts Center. Other inductees included former football coach Henry Frazier III (1986-89) and 1960's track and field star Clarence Mollock, who received the 2014 Barney Lifetime Achievement Award.

Brother Stewart (Gamma Pi '88) was honored for his years as a power hitting third baseman for the Bulldogs with a career batting average of .340. He batted in the third spot three out of four years and was an integral part of the 1982 Bowie State CIAA championship team. He was Rookie of the Year in 1980.

The Hall of Fame is a family affair for Brother Stewart as his father and oldest brother are in the Eastern Shore Baseball Hall of Fame. Another brother, Thomas, was just inducted into the University of Maryland-Eastern Shore Basketball Hall of Fame in February." It's been a great journey for the Stewart family," Brother Stewart said. His Brother Alan (Gamma Kappa '80) accepted the award in his behalf along with his daughter.

Brother Stewart is from Princess Anne on the Eastern Shore and is the 9th of 10 children, all of whom have finished college and most who have advanced degrees.  He runs Stewart Financial Services in Lanham, Md. Brother Stewart has also co-authored a book on financial matters, "Saving Middle America: Securing Financial Dreams." You can purchase the book at www.savingmiddleamericabook.com and watch a video interview about the book that Brother Stewart gave to Gamma Pi TV in 2011.Brother Stewart and his wife are the parents of a son and two daughters. The oldest daughter is a freshman at Bowie State.

Brother Morgan (Gamma Pi '99) was inducted for his stardom in football. Brother Morgan, who is now the new Assistant Head Coach at Morgan State University, played linebacker from 1989-92 and had the most tackles (89) in one season which happened to be a championship season for Bowie State when it won the CIAA title. He also holds the record for most tackles in a season (133) in 1992.

Brother Morgan is the new Assistant Head Coach at Morgan State University in Baltimore where he serves as Defensive Coordinator. He is a former  Head Football Coach at Fort Valley (Ga.) State University, where he also served as the President of the SIAC Coaches Association and a member of the Division II Southeast Regional Advisory Committee for Football.  His memberships and honors also include the American Football Coaches Association and the Black Coaches Association, and in 2011, he was selected to participate in the NCAA Expert Forum. He also took part in the NCAA Advanced Coaches Academy in 2006.

Brother Morgan earned a B.S. in Sociology/Criminal Justice in 1993 and a Masters in Education Guidance and Counseling, all from Bowie State, in 1995. His community service includes serving as youth advocate and mentoring at-risk youth. He and wife Tisa are the parents of three children.

"The BSU family is extremely proud of these Brother for their athletic performance while attending our university and we are equally as proud of their accomplishments in his career, community activities, and service to society at large," said Gamma Pi's Brother Alfonzo Powell, an influential alumni who was on the school's Charter Omega Psi Phi Line (Epsilon Sigma) in 1969. A total of 8 Omega men were among the Hall of Fame inductees, including former football coach Frazier.

Posted by James Alexander at 10:49 AM No comments:

Throughout the day at the Kentland Community Center in Landover, local bands belted out jazz, hip-hop and R&B music from three outdoor sound stages. A few thousand people milled about buying food from the vendors, fellowshipping with friends and enjoying a good weather weekend from the comforts of lawn chairs, tents and picnic tables. No mistake, the annual Harlem Renaissance Festival was in full swing again in Prince George's County.

Inside the community center,  the topic was health and wellness.  For the Brothers of Gamma Pi, it was more than just the Harlem Renaissance Festival. Saturday's event was a tremendous opportunity to reach out to African Americans about taking care of their own health and looking out for the health of others as Gamma Pi chapter held its Annual Health Fair and Charles Drew Blood Drive as part of the Renaissance Festival. The Health Fair and Blood Drive is a mandated program of Omega Psi Phi Fraternity, Inc.

Whether they donated blood or just perused the information tables and discussed preventive health with any of a number of representatives who took part in the health fair, patrons from the local community were able to learn about cancer, diabetes, heart attacks, strokes and other diseases that afflict African Americans, often disproportionately.

According to Bro. Dr.Kevin Ford,M.D., who heads the chapter's Health Fair and Blood Drive,
cardiovascular disease is the number one cause of death in men and women.  The screenings being offered at the health fair focused on 4 of the 5 risk factors for heart disease which include hypertension, diabetes, hyperlipidemia and tobacco usage. Approximately 100 participants were able to take home  handouts  for the various diseases  or  have their  blood drawn. Participants were also able to have blood drawn to assess kidney function and PSA levels for men to assess their  prostate.

Bro. Dr. Michael Turnbull and his staff were  present giving out information on psychological services and Bro Dr. Edward Chapelle, DDS, was able to supply free tooth brushes and tooth paste to those who wanted them.  Bro. Dr. Lester Miles was also on-site during the event.

The blood drive had 36 people sign up to give blood and Gamma Pi was able to collect 18 pints."This is what we expect, that about 50% of people who sign up  to give will be eligible to give The 18 pints of blood will help 54 people who will need a blood transfusions and potentially save their life," said Dr. Ford.

People who came out for the event represented every age group and they included men, women and children. There was also some cultural information available including a display saluting Nannie Helen Burroughs manned by Brother James Wyatt, a 63-year- member of the Fraternity.

At least 30 Gamma Pi Brothers including Basileus Brian K. Long rotated through the event all day helping to man the volunteer's table, overseeing the health fair and working at the American Red Cross bloodmobile. 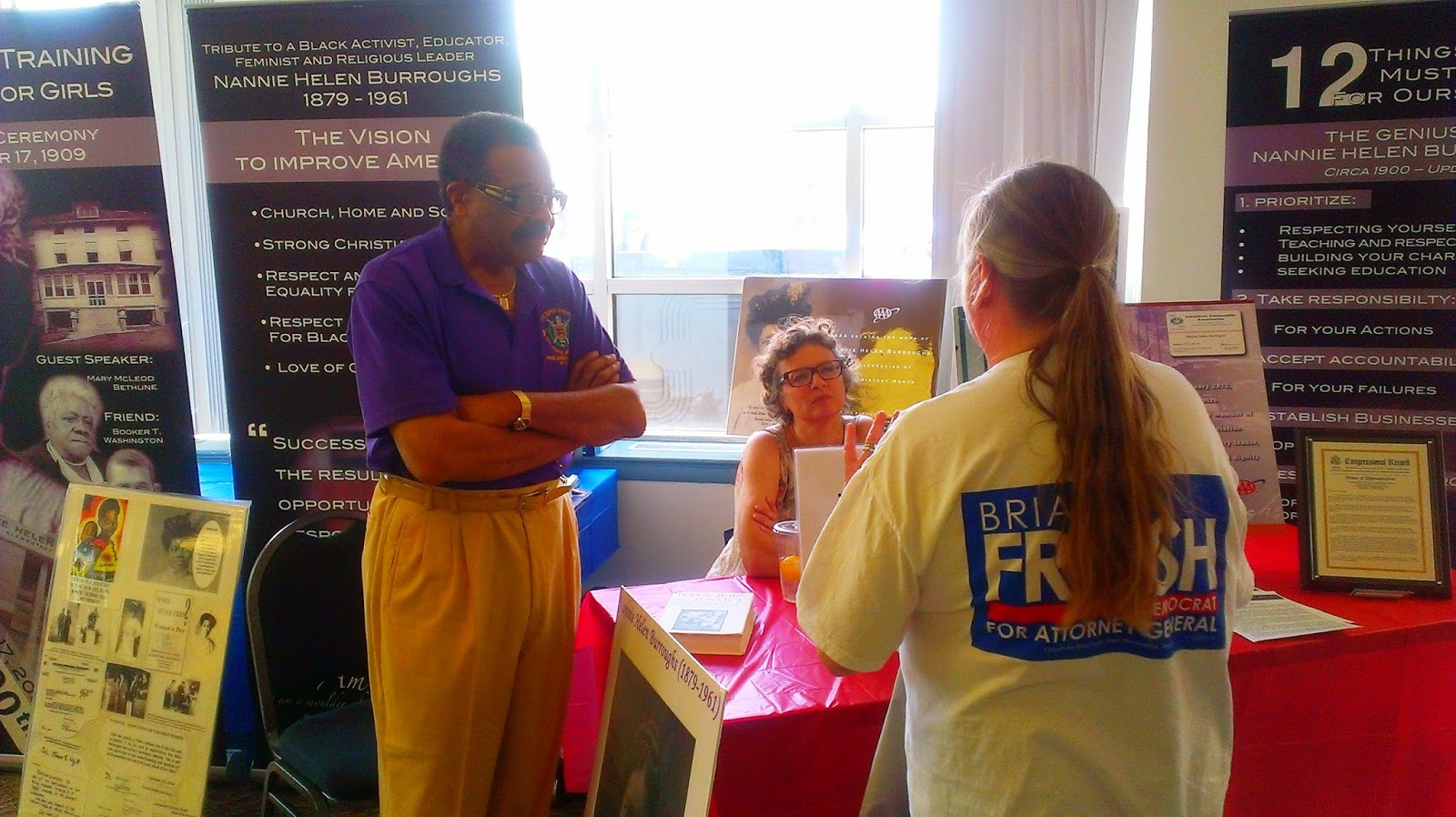 "The men of Friendship Charities Foundation and Omega Psi Phi recognize the importance of promoting community harmony and cultural awareness. That’s why we are honored to serve and support events such as the Harlem Renaissance Festival," said Brother William N. Smith, who arranged the chapter's participation in conjunction with the Harlem Renaissance Festival. Below and in the story are some photos from the event from Brothers Thaddeus Turner and Brett Blake.


Posted by James Alexander at 11:10 PM No comments: