Father's Day weekend turned out to be special for some of the most forgotten and overlooked young males in the DMV area who are locked away from mainstream society. At a time when fathers are looking forward to spending time with their own children and grandchildren, the men of Gamma Pi struck out from home early on the morning of June 20, the day before Father's Day, and headed inside the closed Cheltenham Youth Facility to interact with the young men being held there as juvenile offenders.

For many of the youth, it was as close as they would ever come to being with their fathers on Father's Day. As in recent years since the project started, Gamma Pi used the visit to share knowledge with the incarcerated young men about how to look at their detention as a new starting point to dream, build and conduct productive lives in the larger community when they get the opportunity to leave the facility. It was an opportunity to show them how to "man up" about their lives and take responsibility.

Because the young men are in a secured facility with armed guards, entry is restricted. No cameras or recording equipment are allowed on the property. Once inside, the electronic gates topped with barbed wire are slammed shut behind the visitors just like the penal facilities we see on TV. The youth are housed in a collection of small cottages behind the iron perimeter gates where the doors are locked to outside entry and exit and all activities take place under the watchful eye of the guards.

Brothers could not just walk into the Cheltenham yard. Each member of the chapter involved in the project had to pass through a security checkpoint individually, shedding phones and electronics, much like boarding an airplane. After all, many of the youth have been brought in on violent offenses, so it is not like visiting young men at your neighborhood recreation center. Many of the young men are judged incorrigible. But to the Brothers of Gamma Pi, it is about hope and never giving up on anyone, especially on young black males, who make up the large majority of Cheltenham's population which in many respects mirrors the adult male prison population.

On a day when The Super Chapter had its monthly chapter meeting and annual elections, the Brothers arose and met at Cheltenham at 7:45 a.m. to start the day.

Gamma Pi men are realistic about the experience and know that even in a daylong series of information sessions and discussions, lives cannot be turned around, But if the right words are said to catch the attention of just one individual, the process of rehabilitation can begin, not just for that one young man but perhaps others who are observing as well.
.
The theme for this year's visit was "Perception." More specifically, the young men, as young as age 13,  were asked how they thought they were viewed by the outside world. The question was posed to the young men in a PowerPoint presentation that kicked off a discussion about self-image and self pride. Led by Brother Otis Fowler, who has headed the excursion in the past couple of years, Gamma PI Brothers, more than 50 strong in attendance, displayed a series of negative images to the youth to get reactions from them about how perception works.

"We talked about how an image can be viewed from different perspectives and the meaning or thoughts generated can be totally different. Also, this presentation examined a few stereotypes and then asks the questions:  What do you see when you see people? What do people see when they see you?," said Brother Fowler, who was bestowed Gamma Pi's Founders' Award at the Achievement Week observance in November.

The Cheltenham effort began in 2011 as a joint effort of Gamma Pi and other local fraternity chapters as well as the Groove Phi Groove social fellowship. Brothers Greg Crawley and Terry Rogers, who served as Social Action chairman at the time, spearheaded the inaugural effort. As the years have gone by, Gamma Pi has taken on the Cheltenham project single-handedly.

Clearly, there is a need for the project: "I can't count the number of times I heard from Brothers that we MUST come out more than once a year," said Brother Fowler. "I have already begun discussions with the staff at Cheltenham for us to visit more often.  I'll be forming a committee to develop discussion topics, events and other activities, I'll be calling on Brothers for support!"

Posted by James Alexander at 11:12 PM No comments:

I Thought I Was Going To a Senior Citizens' Banquet

This afternoon I set foot inside the Fellowship Hall at Gethsemane United Methodist Church in Capital Heights, MD thinking I was attending Gamma Pi's Annual Senior Citizens Banquet. But by the time it ended, I had gone to "church!" The spirit was surely all throughout the place as the brothers of The Super Chapter set it out for our senior citizens in the community with delicious home-cooked food, friendly fellowship and a sermon brought by our chaplain that probably covered us all for two weeks.  I was glad to be in the place to witness one of the best Senior Citizens Banquets that Gamma Pi has hosted. The Super Chapter made me PROUD and I know that Bro. Phil Ferguson was looking down from Omega Chapter pointing his finger saying "those are my brothers"!!!!!  Thanks to Bro. Don Norwood and his committee for putting on an outstanding event that shows why we are the Chapter of the Year and runner-up for the Social Action Chapter of the Year.  Thanks to Bro. Joe and Mrs. Carolyn Williams for obtaining the facility for this event on the chapter's behalf.

Apparently, I wasn't the only one feeling the spirit. One of our guests let her joy be known by breaking into a Holy dance filled with the spirit that caught the attention of the entire room. This is what happen, our newly reformed Gamma Pi Chorale ushered in the Holy Spirit with several selections but when they broke out with "Down at the Cross where my Saviour Died "Glory to His Name"", the Holy Spirit took over. Bro. King allowed the spirit to have its way before he could give the WORD.  It was just a joy to see the Seniors having a wonderful and enjoyable time.  I was glad to have our Grand Keeper of Records and Seal, Bro. Kenneth Rodgers, to join us with having such a busy and traveling schedule.

I also want to thank  the brothers who participated in the formal program: Bill Reese, our fabulous emcee; Bros. Tony Lee, Tommie Boone, and our chaplain Brian King, who brought a very spiritual message about how our elders have paved the way for our success today.  Not only did the sermon take us to church, but so did the music provided by our Gamma Pi Chorale led by Bro. Marcus Davis, and the instrumental ensemble comprised of brothers George Edwards, Marcus Davis and Don Myles. And we absolutely have to give a shout out to the hardworking crew of Gamma Pi brothers who got up early this morning to prepare the food and then stayed around to serve it to the seniors at their tables. Approximately 30 brothers had a role in this event and it was great to see the room packed around the perimeter with Gamma Pi Chapter brothers adorned in purple. The door prizes were also fantastic and the seniors could not contain themselves.  By the way, I have to give accolades to the Friendship Charities Foundation, led by Bro. William Smith, and it's board members for sponsoring/ funding this event. 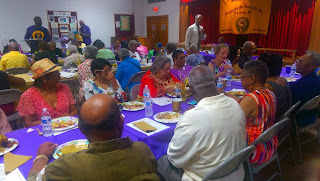 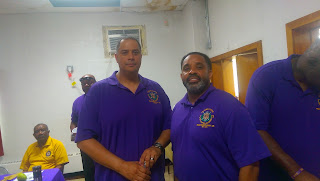 Posted by James Alexander at 11:27 PM No comments:

Project ENRICH Ends 2014-15 On An Exciting and Uplifting Note

Gamma Pi's flagship Scholarship program, Project ENRICH, continues to grow by leaps and bounds. That was evident by a Standing Room Only crowd that gathered at the Thurgood Marshall Library Auditorium on the campus of Bowie State University for the official end-of-year salute on Saturday, May 30. It was one of the most memorable closing programs in years.

One of the things the program has focused on more in recent years is providing students a more direct link to the outside world and the place they can have in it through hard work and study. To do that, Project ENRICH has brought in a number of speakers who are accomplished in their field. This year's closing program keynote speaker, Ambassador Bisa Williams, a Deputy Assistant Secretary of the U.S. State Department, underscored that effort in a huge way, with a rousing and inspiring presentation that got the students excited about foreign service and had parents thinking abut just how wide open career options can be when students think "outside the box," and explore career areas that aren't typically introduced to young African American youth.


Judging by the questions, students appreciated most her candor in describing the challenges she overcame and how she became a successful diplomat without going through school studying to be a Foreign Service officer. The daughter of a doctor and social worker from Trenton, NJ., she was educated at Yale undergraduate and studied Comparative Literature in gradate school at UCLA. Her message to students was that diplomats have varied interests and academic backgrounds and there is no one-size-fits-all career path. She invoked the name of many African Americans who have served in the diplomatic corps, including Gamma Pi's own Teddy Taylor, now stationed in Cape Town, South African.

"No one ever mentioned to me the idea of being a diplomat. I of course knew there were such things as diplomats, but that was never in any of the conversations in any of the social circles I was in," she said.":I learned about the Foreign Service by reading an ad in Black Enterprise magazine."

As always, the Project ENRICH students were impressive. Showing growth, maturity and self-assurance that maybe was not a part of their makeup when they started the program, the students -- representing all grades -- amazed and encouraged their families about their future when some of them took turns at the podium to provide an overview of their experience.


Perhaps no one was more proud than Bro. Willie Hines, who has rejuvenated Project ENRICH in recent  years with a creative approach to running the program that focuses on getting more practical information to students and parents to help them not only study better, but be more informed with inside knowledge about the college selection and application process, choosing a major, choosing a career and becoming well-rounded individuals with a sense of community responsibility and a global view. Under Bro. Hines, Project ENRICH has expanded beyond just helping students with academics.

There is plenty of video evidence of  the success of Saturday's program. Click here to watch the first 40 minutes of the live broadcast on Gamma Pi's Ustream TV Channel.