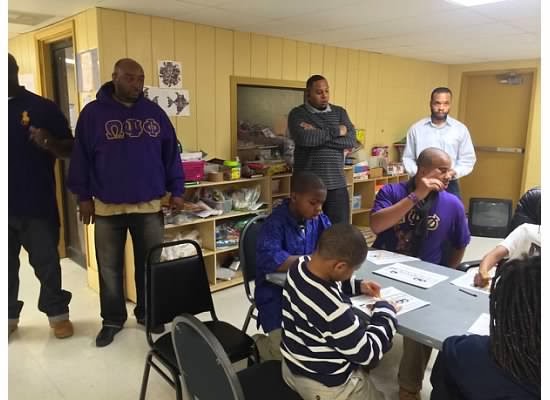 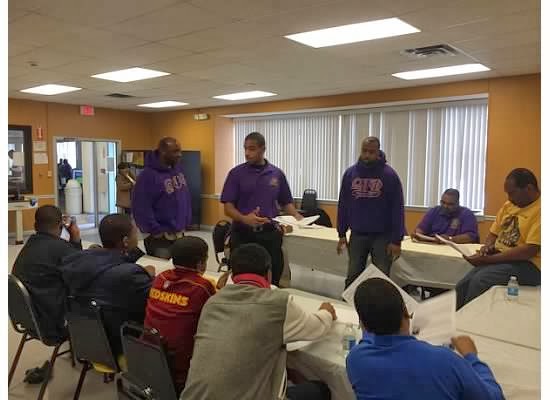 
Posted by James Alexander at 11:09 PM No comments:

In True "Super Chapter" Fashion, Brothers Reach Out to Youth with Education Message

Scholarship is #1 with Gamma Pi chapter as it is one of the Four Cardinal Principles of Omega Psi Phi Fraternity, Inc.  From its Project ENRICH initiative preparing students for college to its Que Kidz Dayz program to expose underserved children to recreation, cultural and educational opportunities on Saturdays, Gamma Pi invests a lot in the welfare of young people throughout Prince George's County.

Recently, the chapter showed its commitment to education through efforts outside the scope of those two ongoing programs that have won the chapter awards for Social Action. Two highly regarded and highly committed Brothers -- one through the invitation of another Brother -- on their own reached out to youth to carry forward the message about Scholarship.

Dr. Harrison Foy, a veterinarian in the Washington, D.C. metro area, talked about his career and educational preparedness to a group of honor students at a February 6 assembly at Prince George's County's DuVal High School in Lanham. Dr. Foy operates NMotion mobile veterinary care services and is eager to see more young African Americans enter this challenging and wide-open field, jut as he did along with his wife and now a daughter,who is in veterinary medical school.

Brother Dr. Foy was invited to speak by Brother Dameon Powell, who heads up the Guidance Department at DuVal and also is the school's head football coach. Brother Powell's hardworking team finished 10-2 in the 2013 season and ended a great run in the second round of the state 4-A playoffs.

In the other endeavor, Brother Dameon Goins, one of the up-an-coming stars in education as new Principal at Gaywood Elementary in the Lanhanm-Seabrook community, used his powerful delivery and motivational abilities to connect with young African American males during a recent Raising Kings conference. When Brother Goins speaks, young teenagers, especially African American males, listen up because they relate to his "get real" approach and laying it on the line. The video below is an excerpt of his full presentation.

Gamma Pi and Omega Psi Phi salutes these Brothers for reaching back and lifting up through Scholarship because they believe in and can reach our youth.

Posted by James Alexander at 10:39 PM No comments: