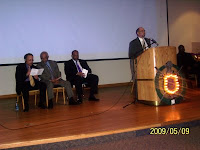 Gamma Pi chapter's flagship education initiative, Project ENRICH, ended the 2008-09 year today with an exciting and uplifting closing ceremony held at Bowie State University. Nearly 200 students, parents, other family and friends turned out to congratulate students on completing another year. It was a special day for seniors in the program who began in the 9th grade when Project ENRICH was restarted in 2005 after a hiatus period. To fully complete the program, students must be active from 9th through 12th grades consecutively.
In conjunction with the Project ENRICH program, the Scholarship Committee also announced its winners Saturday. Headed by Brother Antonio Santos, the committee awarded $12,000 t 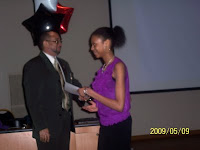 o eight Prince George's County students and an additional $8,000 will be made availavle for follow-on support for previous scholarship winners who are returning to college next year. The newly announced winners are: Brandon Edwin Browne (Bowie High), Melanie Nicole Countee (Flowers High), Dominique Felicia Gill (Suitland High), Kayla LaShell Harley (Suitland), Joy Mariah Hines (Bowie High), Tevin Terrell Jones (Flowers), Briana Maria Riche (Flowers), and Alexander Lloyd Strachan (Bowie). In addition, the chapter is awarding a $1,000 book grant to Thaddeus White III, a four-year participant in Project ENRICH who is enrolling in Morgan State University on a full scholarship in the Fall.
Are you a rising 9th grader or the parent of one in Prince George's County? Are you interested in enrolling in Project ENRICH next year? Get your applications now. Contact Brother Roland Byrd via e-mail or by phone at 301-731-9192. Brother Byrd has organized and run Project ENRICH since its return. As always, his pointed and humorous remarks to students were the highlight of the closing ceremony. Below are some video clips from today's program:

Posted by James Alexander at 8:15 PM No comments: