It was quite close to home, just one county over from Prince George's County. The 68th Second District Conference was essentially a "home game" for the Brothers of Gamma Pi chapter, though it was sponsored by Mu Nu chapter in neighboring Montgomery County. But Gamma Pi has a reputation for showing up at District meetings and Grand Conclaves, whether near or far, and true to that form, more than 50 Super Chapter Brothers represented Gamma Pi at the District Conference this weekend, April 28-May 1, at the Montgomery County Marriott Conference Center in Bethesda. The chapter's attendance spanned from the newest initiates all the way up to at least one 60-year member, Bro. Harold Suggs, as well as several 50- and 40-year members.

Gamma Pi's presence at the Second District meeting was symbolized by Brother Kenneth Rodgers, now the Grand Keeper of Records and Seal and the 32nd District Representative who served in that position several years ago. He received a warm and welcoming reception throughout the conference weekend from the gathered members of the Fraternity, reflecting on Gamma Pi's legacy. Brother Rodgers' elected position on the Supreme Council embodies Gamma Pi's long, successful run in the past 15 years. Per the new District Council, Gamma Pi's Bro. Rev. Dr. Gerald Folsom was appointed to yet another term as the Second District Chaplain. It's been a good-news period for Bro. Folsom who just got his first-ever church pastorate during  a recent meeting of the AME Church. Read About It Here.

In recent years, Gamma Pi, the Second District Graduate Chapter of the Year for 2015, has consistently gotten some type of accolades at the conference, whether chapter or individual. This year it continued, but in a different vein. It began with Gamma Pi's newly re-organized Hop Team, comprised of a handful of new or recent initiates, crowned the winner of the step competition held Friday night, April 29, before an enthusiastic packed house. Vice Basileus Bro. Tony Lee was Master of Ceremonies. The Gamma Pi team will represent the Second District in Las Vegas at the Conclave in July. Gamma Pi also finished Third Place in Social Action Chapter of the Year balloting. The chapter is also a previous Social Action Chapter of the Year. And The Super Chapter also placed in the district-wide Omega Talent Hunt with Gamma Pi Talent Hunt winner Aston Woolery finishing in Second Place during Saturday's Talent Hunt program.

The chapter tallied in the individual awards with Immediate Past Basileus Gordon Everett being named Committee Chair of the Year for the Second District, by outgoing District Representative Milton Harrison, who recognized Bro. Everett's tireless efforts organizing and running the new Violence Prevention Committee. "Our committee worked on several initiatives this year. We worked with the International Committee on a strategic plan. Our committee also held discussions across the Second District in all five states," said Bro. Everett.

Gamma Pi's fingerprints on the Second District even extended to the classy leather conference bags that were given to registrants. They were a hot item this weekend and were provided through a company owned by longtime Gamma Pi member Bro. Alfonzo Powell, who recently relocated to Senegal as part of the export-import business.

"I was proud of Gamma Pi's participation. We upheld our reputation for being one of the most engaged chapters at the District level. We are now looking forward to the 80th Grand Conclave in Las Vegas in July,"said Brother Brian K. Long, Basileus, who, with a new District Council, is already busy making sure that Gamma Pi is represented on the District level. 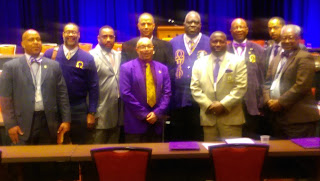 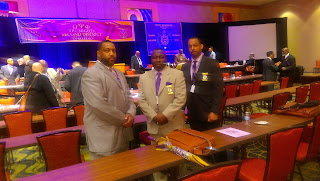 Posted by James Alexander at 11:25 PM No comments:

Project ENRICH is a very special program designed to improve the college preparedness for African American student in Prince George’s County, Md. One of the staples of Project ENRICH is the essay oral presentations. The students’ abilities to sell themselves, market themselves, win and influence people will depend largely on public speaking.

On April 23, at Bowie State University Thurgood Marshall Library 25 students came display their oratorical and compete for incentive awards ($300 first place, $200 second place and $100 third place) per grade level. The Freshmen topic, “ Was Bill Clinton the first Black President”, Sophomore topic, “ based upon the strife young Black men and women experience on a daily basis, does the criminal justice system need to be reformed for the sustainment of the Black Community”, Junior topic, “Is the Black Community in a state of emergency”, and Senior topic, “Predatory subprime mortgages victimized Black America, resulting in decreased college educational opportunities for Blacks” 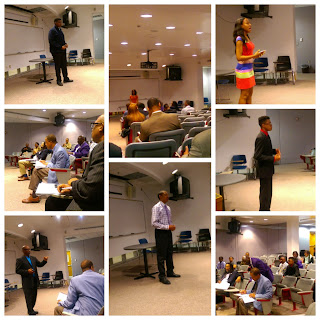 The topics were designed to make our students think, analyze and most importantly become aware of issues facing their communities and the factors limiting educational opportunities in their pursuit for excellence. The students did an incredible job utilizing their personal experiences and performing extended research to defend their positions. The oral presentations were judged on content, style, organization, realism, and mechanics. A three judges were used to evaluate the students’ oral presentations and provide a professional
critique.

The oral presentations are a true measure of the growth and confidence of Project ENRICH students. Watching the improved written and oral skills from freshmen to senior year is a great metric of the success of the program. You can visit Project ENRICH on the web at www.projectenrich.org 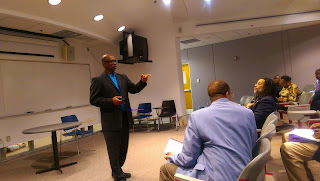 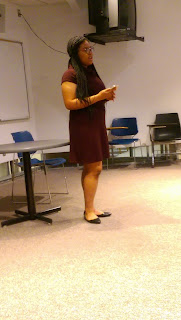 Visit our Facebook page for more photos and videos

Posted by James Alexander at 9:57 PM No comments: