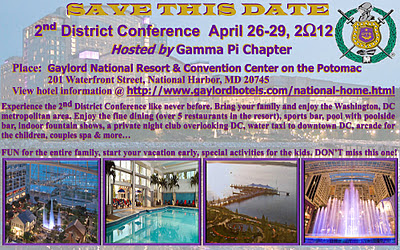 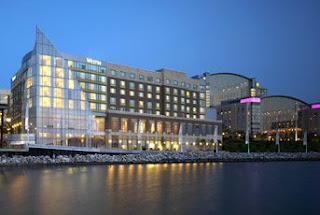 
Posted by James Alexander at 1:41 PM No comments:

You Better Watch Out, You Better Not Pout ... Santa QUE is Coming to Town 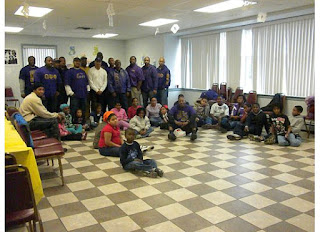 It was early in the morning of December 20,2011, 9 a.m., when they heard Omega Calling. A total of 20 Brothers (what a coincidence!), thoroughly immersed with true Omega Spirit, descended upon Kentland Community Center in Landover under the Leadership of Brother Orlando McDowell to do what all good Omega Men do and joyously participate in yet another of Gamma Pi Chapter’s many community service projects. Today it was Que Kidz Daze, a relatively new youth-oriented program, of Gamma Pi.

No stockings were being hung. No chimney for Santa. Just the joyous spirit of giving, love and support for the 27 children as the chapter helepd them get ready for Christmas.

Activities included breakfast, a Kwanza Celebration, lunch, Secret Santa and "stepping" which kept them all busy up until 1 p.m. Smiles filled the room, as the Brothers served and the Children ate and told the Brothers about their Christmas wishes, grades and their fantastic dreams for their future.

Brothers Darrell Dreher and Marcus Whitfield set up the Kwanza Celebration Display, while Brother Whitfield made the presentation. In short, the Kwanza is considered a 7 day celebration, which begins the day after Christmas. as a cultural holiday, it is meant to celebrate and embrace the Collective Work, Unity and Collective Economics in the Black Community. Three different colored candles -- red (represents blood shed for prosperity), black (represents Black people) and green (represents fertile land & prosperity) -- are to be lit over seven days. All candles will be placed in the Kanuri before being lit. With each day representing a common goal of the community, like Unity, Purpose etc. etc... Optional Kwanza display items included a Fertility Doll that represents prosperity and growth of the community and a Drum, which was the fastest and first means of long distance communication between African people.

The food was good and abundant. As a surprise, the Brothers provided the children with presents and played “Secret Santa”. Brother Roderick Lawrence (Rod #6 Genesis 10) displayed his Omega Talent by controlling 27 children while they negotiated (or "fought" maybe?) over all the great gifts. Other than not having enough footballs, all went extremely well.


In true Omega tradition, we started off strong with food and closed out strong by teaching the QKidz how to "step". Our MVP for the day, Bro. Marcus Whitfield and Bro. Anthony Kelly did the honors of being their "instructors."

Laughter, joy and love were shared by all, if only for a few hours. Who said that STARS don’t come out during the day time? The support of all the Omega Men (List Below) was commendable. I’m sure Coleman, Cooper, Love and Just was smiling. Twinkle, Twinkle Bruhs!

Thanks to Brother Kevin "Buster" Briscoe for the photos 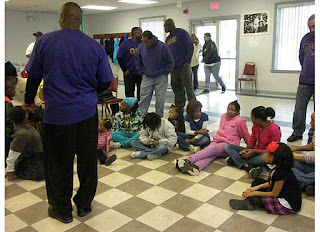 Posted by James Alexander at 11:14 PM No comments: