On the evening of Tuesday, July 15, Brothers from around the entire Omega Psi Phi “Que Country” had gathered at the main Ballroom inside the for the much-anticipated formal Founder’s Banquet. It was the last night of the 79th Grand Conclave. Everybody was dressed “to the nine’s.” Many Omega men exchanged Omega-style hugs and handshakes with long-lost Line brothers, former chapter Brothers and with Omega men they had just met at the conference. Most of the 1,500 or so Brothers and guests were simply enjoying a light meal just before the start of the formal program.

What Brother High said to Brothers in the room and the message Brother Basileus sent out to the chapter back at home was the Omega equivalent to “the shout heard round the world.” Yes, it was true – this was not a prank. Brother Kenneth E. Rodgers indeed had been elected as the next Grand Keeper of Records and Seal for the entire Fraternity. A Gamma Pi man was now standing in the gap among the several going forward from the to lead the Fraternity. This date, this moment was forever etched in Gamma Pi history as a “purple”-letter day.

Brother Rodgers was elected over incumbent Brother Curtis Baylor and Brother Edward Morant. He won the election in the early evening run-off with Brother Baylor that commenced right before the banquet began. The Founders’ Banquet ended with the new Omega leadership team receiving the official oath of office as newly installed.

For Brother Rodgers and Gamma Pi, the election was historic. Already the first member of the chapter to serve at the District Representative position, as the 32nd Second District Representative, he now is also the first to serve in an international office. His election as Grand Keeper of Records and Seal will forever mark the beginning of Gamma Pi’s “second 40” years after celebrating its 40-year anniversary throughout 2013.

Brother Rodgers’ election also culminated weeks of extensive and energetic campaigning that began more than a year ago.  Weekly strategy meetings, calls, preparing and printing materials campaign materials and traveling and visiting with chapters around the country paid off for Brother Rodgers, known affectionately in Gamma Pi as “Swamp Dog.” Actually, the journey to Grand Office was a long time coming, first talked about some 10 years ago as Gamma Pi decided to become more active within the Second District by contributing service through seeking out official office positions and boosting chapter attendance at District meetings.

Gamma Pi’s Brother Roland Byrd was a key player at the very beginning of these developments and now a part-time retired resident of , he was able to be at the Conclave in person and witness Brother Rodgers’ election.

Brother Rodgers thanks his campaign team and all the Brothers of Gamma Pi and the Second District for all their support and confidence in him in ensuring his important election to International office.

Posted by James Alexander at 11:42 PM No comments:

The school year is over and it’s now time for some summertime fun with the children of Kentland Community Center.  The men of Gamma Pi Chapter of Omega Psi Phi Fraternity, Inc. entertained, encouraged and mentored 12 children on Saturday, June 28, 2014.  Our program focused on the following core concepts (Cultural Awareness, Healthy Living, Academic Achievement, Service to the Community and Etiquette Training).  As always, we began our program with a healthy breakfast and a discussion strategically chosen to educate the children.

Safety:
Brother Donald Belle lead our program with an interactive discussion regarding safety and how one plan versus another would be more appropriate for a given emergency situation such as, a fire or a burglary in the home.  Additionally, we discussed how the children should react to a stranger knocking at the door of their home if mom and/ or dad were not present in the home at the time.  We then segued into a water safety crossword puzzle where the children were challenged to see who could find the most words about water safety.  There was one child that found 13 words and was considered the top word finder of the program.

To further the discussion of safety and summertime, and since most of our activities after breakfast were going to be performed in the sunlight, we discussed the potential dangers of too much exposure to the sun, and applied sunscreen to each child before they performed the outdoor activities planned.

Introduction to Golf:
What a fabulous opportunity the children of Kentland Community had in learning the basics of the challenging game of golf.  Bro. Kevin Greenwood and Bro. Chris Fleming did an outstanding job facilitating how to putt, and the children soaked up the information like a sponge.  More importantly, the actual putting performed by the children and the desire displayed by the children to actually sink the ball in the hole was nothing short of exciting.  They learned about 3 different golf clubs, the putter, driver and the pitching wedge. 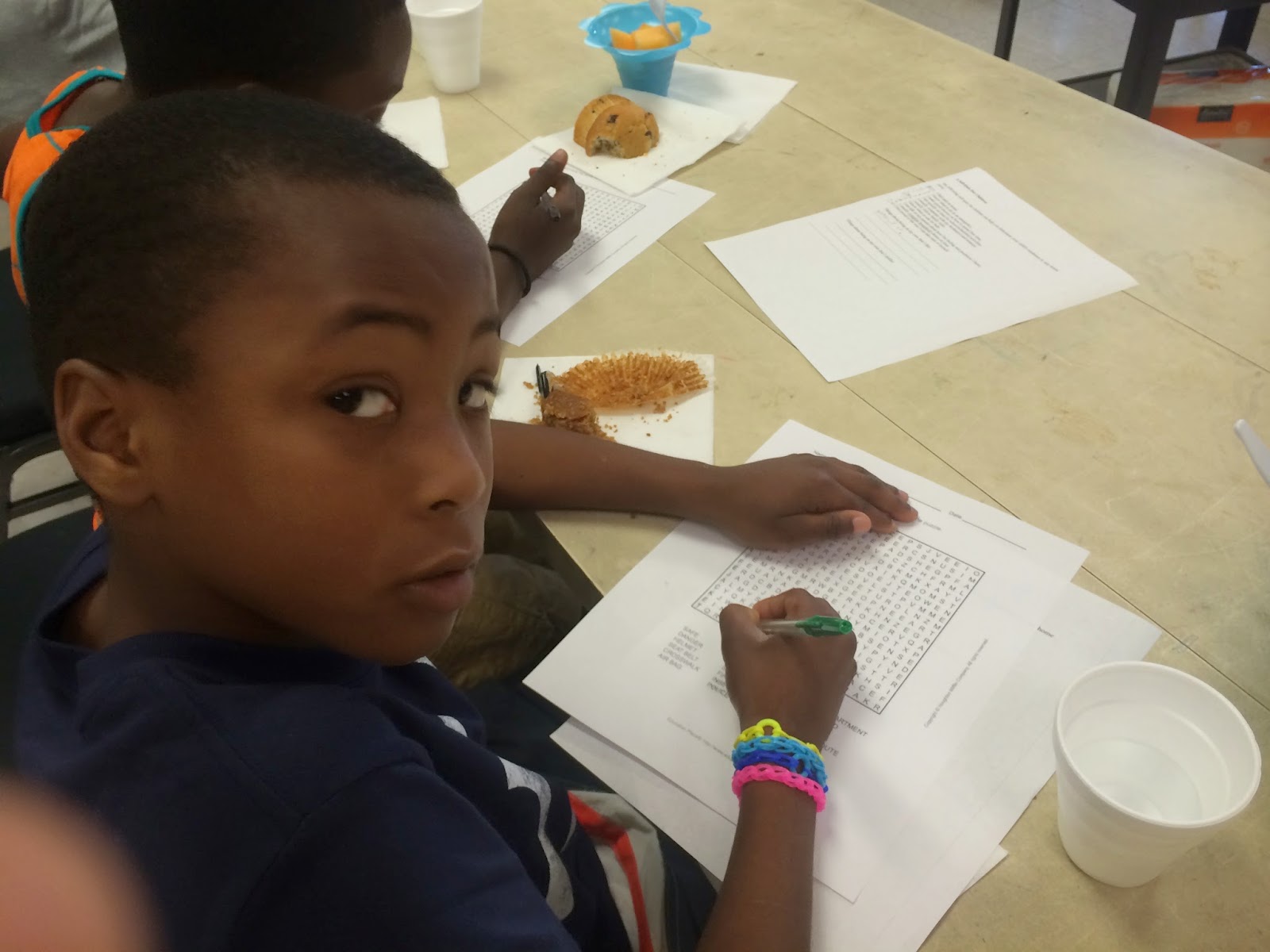 In addition to learning about the clubs, the children were exposed to the proper way of putting, the stance, and how to study the hole in preparation for a putt shot.  The men of Omega Psi Phi Fraternity, Inc. enjoy healthy competition, and so we challenged the children to making a long putt and to sink the ball with the fewest number of strokes.  Most children began approximately 15 feet away from the hole as one child putted and made it in only 2 strokes, which was incredible for first time exposure.

The exposure to the game of golf is not very prevalent in our communities however, the exposure on Saturday and if consistently promoted by the men of Omega Psi Phi Fraternity, Inc., coupled with the desire of the children to continue to want to learn how to play, the opportunity could create many positive and productive pathways in many of the lives of the children that attend our programs in the Kentland Community.

Obstacle Course:
Also, in the spirit of competition we developed a challenging obstacle course for the children that tested physical balance, stamina and perseverance.  The obstacle course consisted of balancing a book on their head while walking to a station within the course, hula hooping to another and continuing the course by revisiting, and re-teaching how to tie a tie, and ended by making a lay-up on the basketball court.  While some of the activities in the course were difficult tasks, the fortitude that was carried out by the children to finish the course was amazing to witness. 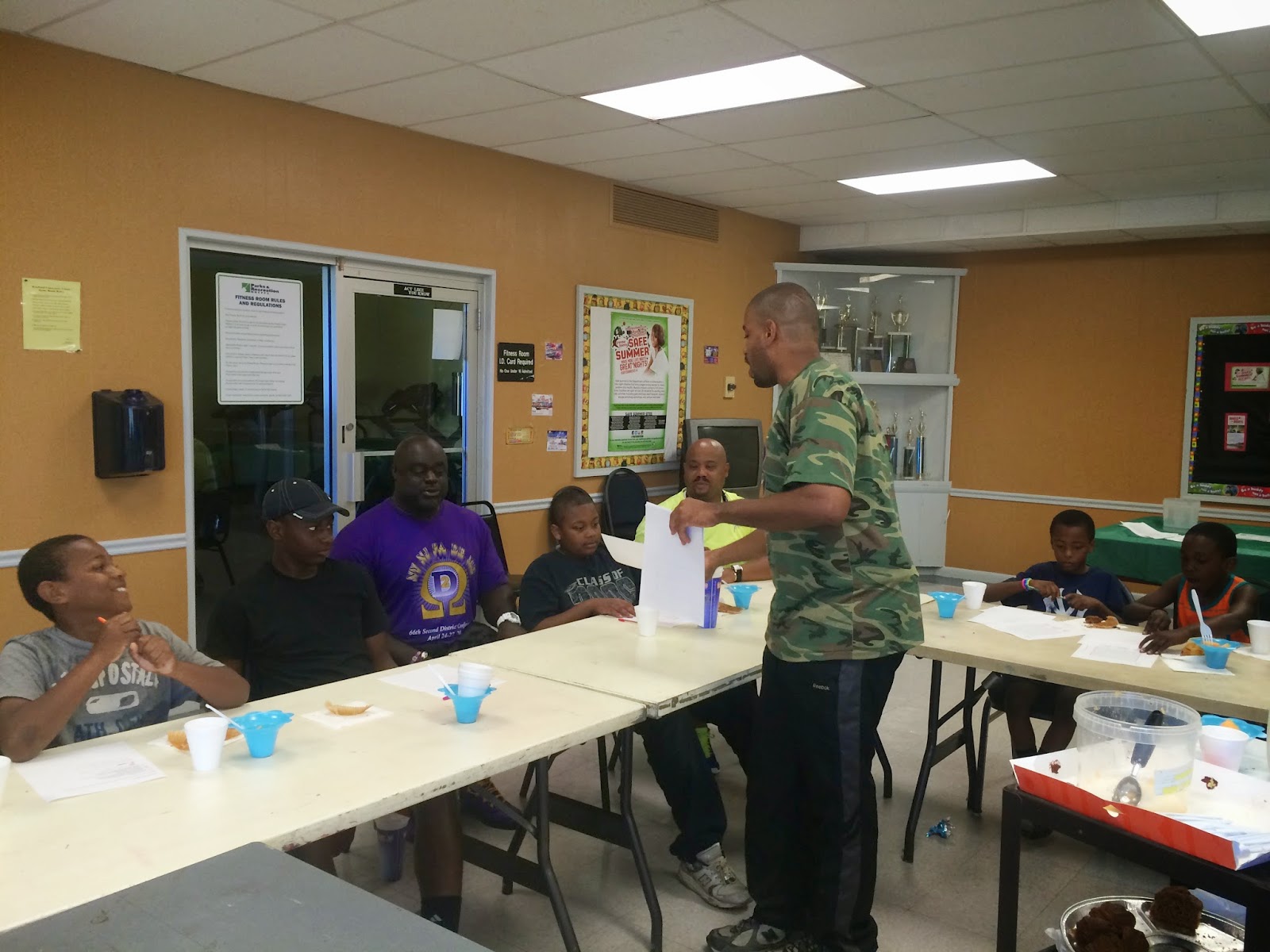 Competition is healthy and is needed to push children to the next level.  Although we wanted to see how the children responded to the spirit of competition, it was much more important for us to see the willingness of the children to persevere, and they did.

Clean-up, Lunch and a Lesson in Hygiene:
After 60 minutes of active play, the children gathered the golf clubs from the course, cleared the make-shift obstacle course and made their way to a hearty and healthy lunch prepared for them.  We served a nutritious lunch and recapped the day with an interactive discussion about what they learned and experienced.

We ended the program by presenting the children with a gift bag of hygiene products that consisted of a toothbrush, dental floss and toothpaste.  The purpose of this activity was to continue our push for clean living in our communities which is consistent with our acronym, C.H.A.S.E.

Thanks to Bro. Kevin Greenwood for the photos
Posted by James Alexander at 11:17 AM No comments: