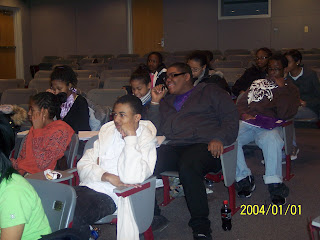 On any given Saturday morning, many people find it an opportune time to sleep in and catch some extra winks. Those who do wake up from their sleep during the early hours of Saturday morning often find it a perfect time to remain in a state of half-dress and sip on coffee and read a newspaper while enjoying not having to battle with the daily commute to work -- at least for a couple days. But a small knot of men from Gamma Pi chapter see one Saturday a month as a great time to help some of Prince George's County's young high school students find the right road to academic success and college.

Since its recent revival by Brother Roland Byrd, Project ENRICH has continued to gain momentum and change young lives. It is so well-recognized, many "graduates" from years past come back at the closing ceremony to pay homage to the program for having made a difference in their lives.
Early today, the Public Relations Committee visited with the program to get a sense for how things are going in the 2008-09 academic year. No question, Project ENRICH is on a roll. Project ENRICH is fascinating to observe. You get an over whelming sense of satisfaction from seeing the expressions on the faces of students and even some of the parents and guardians who accompany them to the Saturday sessions. You can feel the surge of confidence and knowledge flowing into each student from talks given by chapter Brothers in higher education and other walks of life.
This morning, those in attendance learned how to compute Grade Point Average; which schools (including HBCUs) attract the most National Achievement Scholars; the low college enrollment rate of Black males; and seniors, who were pulled to the side in a separate room, were given useful advice about what they ought to be thinking about as they head towards graduation and life "on their own" as college freshmen. Project ENRICH offers one of the strongest connections to our youth of any program the chapter has ever developed. It is a model beyond Gamma Pi chapter.
One other observation about Projct ENRICH -- it feels like school. Students are required to sign-in, get some refreshments and head toward the classrooms. One of the leading lecturers is Gamma Pi's Dr. Franklin Chambers, the new Vice President of Student Affairs at Coppin State University in Baltimore. Brother Dr. Chambers spent more than a decade in a high-ranking post at Howard University in Washington, D.C. Brother Pete Ford coordinated today's sessions for Brother Byrd.
About 12 Gamma Pi Brothers, including Basileus Maurice Calhoun, were at this morning's session. Project ENRICH is held at Bowie State's Thurgood Marshall Library the first Saturday of each month during the school year.
At least 100 students have signed up this year, but the chapter is looking for even more participation going forward. Students must enter the program in the ninth grade and continue through their remaining high school career to complete the program. Thanks to Gamma Pi's Dr. Mickey L. Burnim, President of Bowie State, and the entire school for allowing Gamma Pi to make use of a campus facility to reach out to aspiring African American college students in Prince George's County. Below are some sights and sounds from today's program. Scholarship ... Uplift ...

Posted by James Alexander at 1:43 PM