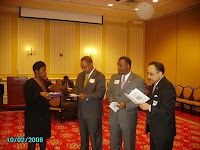 For many of us in the ‘baby boomer’ generation, the Year 2008 brought unexpected joy in the political area and some real pain when we looked at the impact of the economic decline on our investments and prospects for immediate retirement. These major events had similar, but differential impact on generation X-ers and generation Y-ers/millenials. Notwithstanding the downturn in the economy, almost every African American I know, including some hard core Republicans are simply euphoric about the election of Senator Barack Obama as the 44th President of the United States! We have lived to see something some of us thought would never come to pass in the “land of the free and the home of the brave.” Even those of us who think we know something about America’s racial history and the political landscape, must honestly acknowledge that a “perfect storm” of political circumstances and historical events came together to elect the Nation’s first African American President. Truly, there is a God.
Once the inauguration celebrations are completed on January 20th, African Americans and many of the organizations we hold membership in, must immediately return to the unfinished work of establishing social justice, ensuring educational opportunity, and enabling economic equality for Black Americans everywhere. It is my hope and prayer that Gamma Pi Chapter and the Omega Psi Phi Fraternity, Inc. will continue to provide leadership in the public arena, and hold up our Four Cardinal Principles of manhood, scholarship, perseverance and uplift in 2009. As an organization of black men, we are in a unique position to lead by both personal example and by professional model, at home, in the community and in the world. The election of a Black Man as President of the most powerful nation in the world provides a platform and a call for all of us to stand up and to perform. Is Omega prepared to respond to the challenge? I believe the answer is YES!
First, on a very personal level, each brother in Gamma Pi Chapter should examine his personal lifestyle and priorities. Ask yourself: are you a good father, husband, uncle, brother, or mentor? What can I do - just a little better - to make my home and spiritual life stronger, and to create an environment that will allow me to `live in the Light? In 2009, each of us should find one area for potential improvement, and excel at it throughout the year.
Second, what are you doing in Gamma Pi Chapter to facilitate the achievement of the Fraternity’s cardinal principals and what more can you do to help Gamma Pi, the Second District, or the Fraternity better exhibit those principles. The political arena offers us a chance to lead and to serve. We will be especially challenged this year to hold our public officials feet to the fire on key budget and appropriations issues in the State of Maryland and in the Congress of the United States. The international economic decline and national depression will become a convenient excuse for elected officials to level fund or reduce expenditures for critical education, health care prevention and social service programs that benefit low-income and minority communities, especially those in which African Americans constitute a majority.
“QUES Night in Annapolis” will provide an important forum for Gamma Pi Chapter and Omegas across Maryland to exhibit civic responsibility and political leadership on key issues that affect the education of African American youth. Plan now to join us in a couple of months (more details to come) and also plan to call your State Senator and Delegate and ask them to come to the event. If you know some Ques that are active in a graduate Chapter in Maryland, invite them to join us in Annapolis.
Third, we must create a climate for and culture that supports the development of institutional leadership in the Fraternity, and that encourages that leadership to work effectively and cooperatively in support of the Fraternity’s goals and objectives. We are proud of our record of achievement and success as the `Super Chapter.’ With almost 180 financial brothers, how much more successful would we be if we were 280 or 380 strong? Reclamation is not just Brother Thad Turner’s job, it’s a collective responsibility. We all know that there are at least 100-200 non-financial brothers in Prince George’s County who could and should be financial members of Gamma Pi! Part of our uncalculated success equation is directly related to our unused potential among brothers who wear paraphernalia at the CIAA, like to ‘step,’ and show up at homecoming to drink and eat, but can’t be found to help with Project Enrich, serve senior citizens at Shepherd’s Cove, or work with the Achievement Week or the Talent Hunt Committee! We can all do just a little bit more, and how much easier it would be if there were more hands on the plow – pushing and/or pulling in the same direction.
The success of the Obama Presidential Campaign was directly tied to an expanded base of participants in the electoral process as both voters and financial contributors. Think for a moment about our full potential as a Chapter and as a Fraternity being measured by the inclusion of a few more brothers and their added intellect and energy as part of the Omega fraternal equation.
Calling all QUES to the floor, got a few here, but we need some more!
Posted by James Alexander at 4:55 PM