On Thursday, March 11, the Brothers of Gamma Pi, Tau Pi, Pi Omega and Psi Nu traveled to Maryland’s capital to host members of the General Assembly at the annual “Ques in Annapolis” legislative reception. Over 50 Brothers participated in the event, which is a record for the annual “Ques in Annapolis”program. Brothers asked questions of and heard from more than 10 members of the Assembly, including Brother Delegate Frank Turner (Howard County) and Gamma Pi's own Brother Senator Ulysses Currie (Prince George’s County). Brothers representing the chapters of Mu Rho, Theta Mu Mu, Chi Delta,  Mu Nu, Tau Lambda Lambda, Kappa Psi and Alpha were at the reception.

As part of the reception, the members of the General Assembly were presented a list of the legislative priorities from each of the participating chapters. The various priorities focused on legislative bills which have been filed during the current legislative session. Each bill focused on building strong families, improving schools and expanding opportunities for businesses, all which are the building blocks of a strong community. In between the formal presentations by the legislators, Brothers enjoyed a light meal and fellowshipped with each other in true Omega fashion. 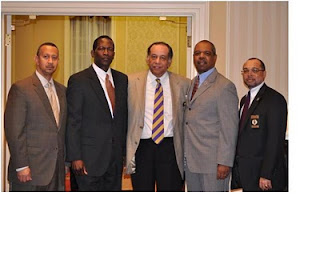 As fate would have it, in the room located next to our reception, the sisters of Alpha Kappa Alpha, Inc. were also having their night in Annapolis event. A highlight of the evening for both programs occurred when the partition separating the events was removed allowing for both receptions to be merged into one. Given the success of that development, perhaps next year a joint reception would be in order.
(In the group photo above from L to R: Bro. Luther Clark, Basileus-Tau Lambda Lambda; Bro. Chester Williams, Basileus-Tau Pi; Bro. Delegate Frank Turner; Bro. John Berkley, Basileus-Pi Omega; Bro. Maurice Calhoun, Basileus-Gamma Pi)
Posted by James Alexander at 7:58 PM