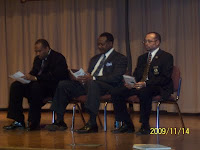 When he took to the podium at Saturday's 36th Annual Gamma Pi Achievement Week program at Suitland's Drew Freeman High School, ABC 7 WJLA TV news anchor Leon Harris admitted that he only figured out what he wanted to talk about a few minutes before he walked on stage. Saying to the audience "I probably should not have told you that," he half-jokingly looked back at the chapter Brothers who were sharing the stage with him, wondering what their reaction would be. And then he launched into an emotional, captivating, from-the-heart stemwinder that amounted to a personal appeal to the students in the audience to look past the naysayers ("even if they are related to you") and the obstacles and make something of themselves.
Posted by James Alexander at 5:37 PM