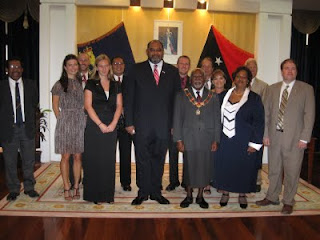 A month ago, Brother Teddy Taylor was saying his goodbyes to the Brothers of Gamma Pi chapter. The South Pacific and the pinnacle of a career as a Foreign Service officer beckoned as he looked forward to serving as one of the few African American U.S. Ambassadors. Today, Brother Taylor has "made port" in Port Moresby, Papua New Guinea and is officially on the job as U.S. Ambassador to PNG (as Papua New Guinea is called), the Solomon Islands and Vanuatu.

In this October 26 photo (it was actually Sunday October 25 in the U.S.), Brother Taylor (and wife Antoinette) is seen with the Governor-General Paulias Matane at the presentation of credentials at Government House. Other members of his U.S. Embassy team are in the photo. Click on the photo to enlarge it. As part of the ceremony, His Excellency Brother Taylor reviewed an Honor Guard and delivered official remarks. An excerpt from those remarks is contained below. Here is a national news story complete with photo about the ceremony from The National Post, one of New Guinea's largest newspapers. Also, Brother Ambassador Taylor was interviewed by Australia Network News. Below, take a video tour of downtown Port Moresby and watch a video news report (EM TV of Papua New Guinea) on Brother Ambassador Taylor's credentials presentation ceremony.

"I am delighted to be here at a time when Papua New Guinea’s economic future looks so promising. Proceeds from liquid natural gas projects as well as other mineral and mining enterprises should enable you to address urgent needs in education, health, infrastructure and many other areas. We will be glad to share our experiences with you in accordance with your national plan. We are proud that American corporations such as Exxon Mobil and Interoil will be providing jobs, training and revenue to the people of Papua New Guinea."

Posted by James Alexander at 10:38 PM