In One Weekend, Gamma Pi "Turbocharges" the Meaning of Omega Achievement 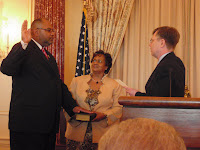 Many people who come in contact with Omega Psi Phi Fraternity, Inc. socially may not get to experience the real meaning and depth of the Fraternity in terms of its purpose and mission. Founded on the Four Cardinal Principles of Manhood, Scholarship, Perseverance and Uplift, Omega Psi Phi is a unique Brotherhood of like-minded men whose lives are grounded in achievement and contribution to community. Gamma Pi chapter put all of these traits on full display in just 72 hours over the weekend of September 18 as it first honored and later witnessed the swearing-in of a U.S. Ambassador from among its ranks, and also welcomed a surprise visitor to the chapter in the person of the first-ever African American chief of NASA who is also an astronaut and a member of the Fraternity.

The Super Chapter's Super Weekend began on Saturday, September 19, at the monthly meeting, the first since the summer break. During the meeting, Brother Teddy B. Taylor, the Immediate Past Basileus of Gamma Pi, was honored with citations and resolutions from local, state and federal legislators in tribute to his recent confirmation as the next U.S. Ambassador to Papua New Guinea, the Solomon Islands and the Republic of Vanuatu in the South Pacific. Among those honoring him were State Senator 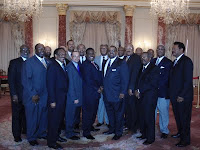 Brother Taylor is a career Foreign Service officer. And today, over 20 Brothers of Omega Psi Phi (most from Gamma Pi) showed up at the U.S. State Department for his swearing-in ceremony. Some photos from that event are posted here from Chapter Keeper of Records and Seal Brother Joe Felder. A previous recent post on Gamma Pi LIVE contains additional details about Brother Taylor's prestigious new assignment. He and his wife depart in October. 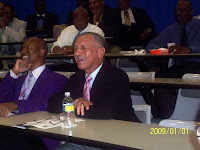 . He was the guest of chapter Brother Clint Green, who is employed by NASA. Brother Major General Bolden gave brief remarks and expressed sentiments tha 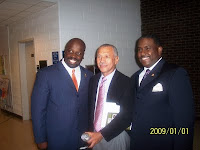 t this would not be his only visit to Gamma Pi. Many Brothers were startled when he stood up along with a handful of other visiting Brothers and simply gave his name and home chapter information. He later received a special introduction. Brother Major General Bolden is not only the first African American to lead NASA, but only the second astronaut to head NASA in its more than 50-year history.

Photos of Brother Major General Bolden's visit are provided in this post from Brother Rodney Beverly and others. Enjoy the photos as well as a video excerpt of Brother Taylor's farewell remarks to the chapter on Saturday during the series of presentations. 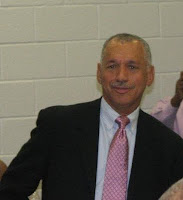 Posted by James Alexander at 11:24 PM