Two months ago, Gamma Pi Chapter Bro. Terence Hare was not really sure what his Mother’s Day 2020 would look like. Truth be told, he faced the fact that it might be a time of mourning for him and his family. After all, his 81-year-old mother, Maxine Hare, was laid up in a hospital intensive care unit in Charlotte with the coronavirus. Suddenly, the headlines about the most dangerous global pandemic since the Spanish Flu in 1918 hit home for Bro. Hare – these weren’t just nameless, faceless numbers talked about on the news. One of those people stricken by this deadly killer was “MOM.”

Today, Bro. Hare is not mourning, but is rejoicing. Since Saturday night May 9, he has celebrated Mother’s Day about a thousand times, thankful that he was able to see his mother go through the worst of the disease and emerge healed just in time for Mother’s Day, when she was able to go home. So, while Mother’s Day was observed on May 10 this year, May 9 will always be a holiday for Bro. Hare and his family to mark that very special homecoming. No more tubes. No more ventilator. No more tests. No more hospital gowns, or beds. No more nurses and doctors trooping in and out all hours of the day and night monitoring her vital signs. No more sitting on ins and needles wondering how it would turn out.

“It was the best Mother’s Day ever,” Bro. Hare said, in hat has to be an understatement, as he looked into the television camera during an interview with Charlotte TV station WSOC Channel 9, which did a feature story on Mother Hare’s triumphant struggle with the disease. She and Bro. Hare's daughter are both members of Alpha Kappa Alpha sorority.

During his mother’s two-month long hospital convalescence, Bro. Hare experienced firsthand, in a unique and special way, the tightly linked Bonds of Omega as he received support from his Line Brothers (2015) including one who lived in the Charlotte area (Perryn Stewart) and another who rode down with him on  nearly 500-mile drive from Bowie, MD to Charlotte (Sheku Alieu) to be by his side and help him care for his mother for two straight weeks.

In another ironic twist about this story, while Bro. Hare’s mother was recovering from the virus, Bro Stewart’s wife, Sarah, was also recuperating from coronavirus in self-isolation at home. Still, Bro. Stewart managed to bring dinner by a couple of times while caring for his wife, who has now recovered and is doing fine.

In many respects, Bro. Alieu actually found himself keeping tabs on everyone. In true Omega fashion, he was able to handle it all and be the Brother that both Terence Hare and Perryn Stewart needed at the time. Hey, it’s something about this Brotherhood of Omega…through thick and thin…

“Mother Hare was admitted on a Wednesday, but Terry kept it to himself until the doctor called him on Sunday night to tell him she was critical,” said Bro. Alieu. “Terry and I packed and left Sunday night within a couple of hours of the call. I stayed there about 2 weeks until she was no longer critical.”

Sadly, the coronavirus, also called COVID-19 by its laboratory label, has stricken more than 1.5 million Americans in just two short months. Nearly 90,000 Americans have died from the disease in the same time frame, and more than 307,000 (imagine three full NFL stadiums on  Sunday afternoon) have died across the globe. Thanks to God, a loving son, other family and friends, and the love of Omega Psi Phi shown through Brothers Alieu and Stewart, Maxine Hare is not in that sorrowful number. She is still with us, very much alive.

[You can reach out to Bro. Hare via email] 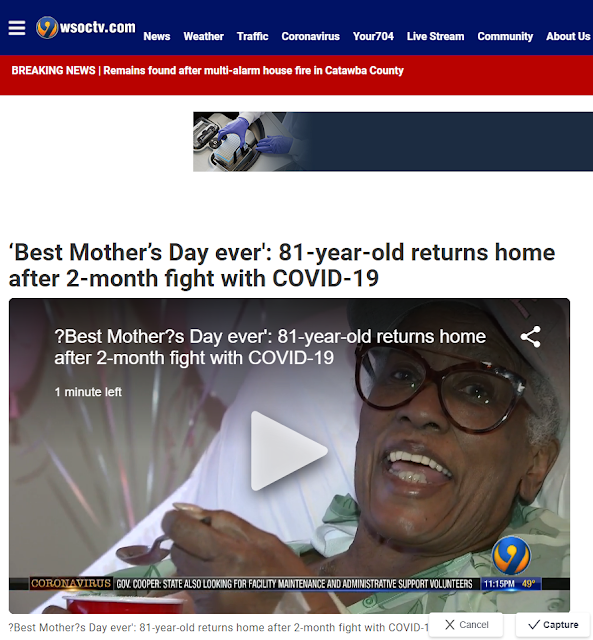 
Posted by James Alexander at 6:43 PM