Unveiling the 64th Second District Conference - SAVE THE DATE 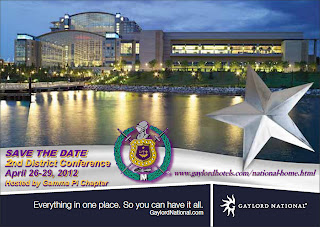 Right now, Omega men across the country are readying for the trek to Washington, D.C. to celebrate and observe 100 years of "blood, sweat and tears" of the World's Greatest Fraternity. But right behind that historic gathering in the birthplace of Omega Psi Phi is something truly special for Brothers of the Second District -- the upcoming 2012 Second District Conference scheduled for the gleaming, new National Harbor complex in Prince George's County, Md.

National Harbor is located on the banks of the scenic Potomac River just outside of Washington,D.C. The dates have now been set and Brothers across Delaware, Maryland, New Jersey, New York and Pennsylvania are making note of April 26-29, 2012 as "purple letter days."
The 64th Second District Conference is being hosted by Gamma Pi chapter of Prince George's. The Super Chapter long ago started the ball rolling in terms of planning. But now, with the Centennial approaching, a "buzz" is beginning to make its way throughout the Second District in anticipation of what promises to be a truly unique event for Omega Psi Phi Fraternity, Inc.The often-heard line is: "Brothers of the Second District have a one-two knockout punch coming with the Centennial this summer...and then the Second District Conference next year."
For Brothers of "2D," gathering to take up Omega's business at the National Harbor will be a fitting way to kick off the "next 100 years" of the Fraternity within the Second District. This venue is classy, interesting, exciting and provides an atmosphere that will make this weekend tailor-made for bringing families and significant others to the Conference. There will be something for everybody to do.
In the coming weeks and months, Brother District Representative Kenneth E. Rodgers and Brother Eddie High, the District Marshal for the conference, will be updating you regularly on details regarding registration, and the agenda. Get yourself "plugged in" now so you don't miss a beat and so you can plan and save for what will be "2D's best-ever District Conference."It will be memorable and you will want to be there for "Ques on the Harbor." Take these steps now to get "plugged in":
Follow Gamma Pi on FACEBOOK (search for Gamma Pi chapter)
Follow Gamma Pi on TWITTER
Follow Gamma Pi on YOU TUBE
Bookmark our new website: http://www.gammapi.org/
Keep up with Gamma Pi on Gamma Pi LIVE


We will also be publishing a newsletter about the upcoming conference in the near future.

National Harbor is on track to become by the time the conference begins, the premier water-located entertainment and resort complex in the entire Northeast. The backdrop it provides to the upcoming 2012 District meeting -- the first of "the next 100 years" -- is fascinating: dining, shopping, nightlife, comfortable accommodations, sightseeing,  miles of waterfront, and accessibility to the Nation's Capitol on the other side of the river.
Want to share this exciting information with other Brothers? Just click on the icons below to post to your own Facebook or Twitter accounts or send a blast e-mail out to your contacts.
Posted by James Alexander at 3:00 PM