There was a lot of good college football action on Saturday, September 29. Some great matchups were on TV and some even  more meaningful ones could be found in person at one of the local area college stadiums. Yet two teams of Brothers from Gamma Pi - with some overlap - managed to fully participate in two major community service projects simultaneously.

Brothers joined the local contingent of Delta Sigma Theta Sorority, Inc. and other Divine Nine organizations and community groups for a daylong scholarship fair at Charles Flowers High School in Springdale. There, Gamma Pi's Project ENRICH program, headed by Bro. Willie Hines,  advertised its upcoming October 6 start for the 2018-19 academic year and registered new students for the program in the process. Scholarship Chairman Bro. Tony Williams was also in tow.

Chapter members also took part in the Surrattsville Community Day program during which the NAACP team, led by Chairman Brother Melvern McCottry and co-chair Lucious Toney , registered new voters on site at the venue. All of this was led by the Social Action team headed by Bro. Kevin Greenwood. Bro Basileus Tony Lee, his "chapter-leased helicopter" down for repairs, managed to shuttle between both events to show support and greet members of the community.

Both events were crowded throughout the day and it was a fantastic opportunity for members of the Prince George's County community to participate in and witness the outcome of Gamma Pi's initiatives to better the community. The Cardinal Principle of UPLIFT was on full display all day.

The benefits to the Community were clear and direct. In the case of the scholarship fair, the chapter was able to share information about Project ENRICH with more than 50 students and families and and sign many of them up for the program. Brochures, flyers and website information was provided to people who visited Gamma Pi's booth and registrations occurred onsite at the table.

For those who encountered Gamma Pi at the Surrattsville Community Day event, the community benefits were obvious. Residents were able to learn more about the Fraternity and chapter and the support programs it offers in the local community and, most importantly were able to register to vote.

Gamma Pi showed Saturday how one chapter through one committee and one vision can make the difference in one community. They don't call us the Super Chapter for nothing. They just call us! 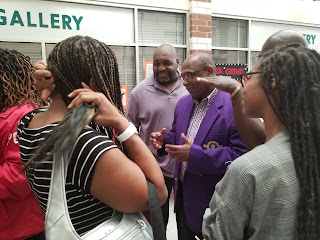 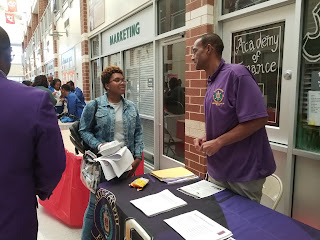 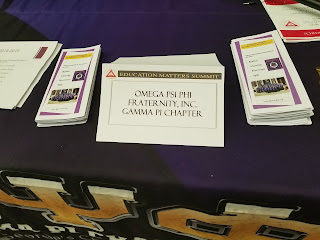 Posted by James Alexander at 2:46 PM