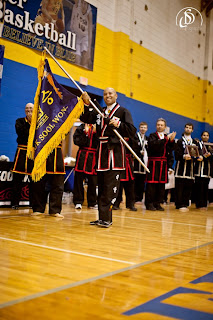 You don’t mess with Omega men. Especially when they have a Fourth Degree Black Belt. Brother Marlin Godfrey, possessor of such skill in martial arts, is also one of the best teachers of the Korean-style Kuk Sool Won™ martial arts fighting method and his expertise showed on April 13 when his school, Kuk Sool Won™ of Maryland, took home the Top School Winner in a 5-state competition featuring more than 250 participants that was held in Sault Ste. Marie, Michigan last week.

Brother Godfrey, who entered the Fraternity as a member of Genesis X in 2011, is the Chief Instructor for the school located in Dunkirk, Md. The school also won the competition last year. About 50 students from the school made the trip along with a contingent of family and friends from the Washington, D.C. area, who traveled by bus, car and air. In the photo at left, Brother Godfrey waves the championship flag. It was nearly a clean sweep as Brother Giodfrey's school took 6 out of 8 Black belt Grand Championships at the competition. Learn more on the Web. Below are a couple photos from the event. Congratulations to Brother Godfrey and his team for a job well done! And you better bow down or just "duck" when you see him coning. 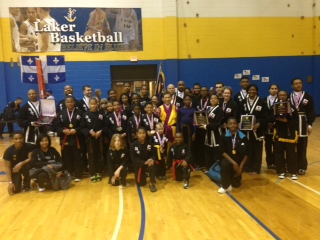 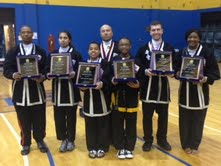 Posted by James Alexander at 2:02 PM