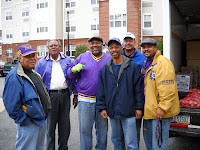 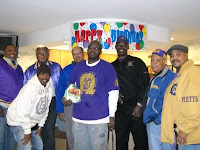 a Gamma chapter, in nearby Fort Meade, Md., went door-to-door and delivered about 100 turkeys to seniors of the Windsor Crossing Apartments in Suitland and to other homes in the area. According to Gamma Pi's Brother Mel White, who led the effort, there was a lot of work involved even before the turkeys could be delivered. Brothers first had to load a truck at a nearby warehouse and then unload the truck after it arrived in the Suitland community. These photos are from Brother Kevin Briscoe, who captured some of the Omega men who contributed sweat equity to the project. As always, the men of Omega Psi Phi put their heart and soul into the community. It is truly about service.
Posted by James Alexander at 9:27 PM