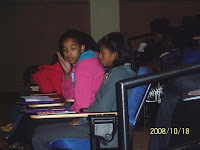 Learn more about Project ENRICH at the Gamma Pi Web site. Read this blog to follow project ENRICH throughout the school year. See video below from Saturday's ceremony.
Posted by James Alexander at 11:40 PM