A Gamma Pi Chapter Brother is about to set the world on fire with a brand new book about Black fathers. Bro. Anthony McAllister, his wife Tyreese along with 17 amazing co-authors, are set to release his anthology titled, "Fathers Matter," on Sunday, October 10 with a virtual book launch party on Zoom. The book is intended to change the narrative of Black fathers. One of the dynamic co-authors is Bro. Kevin Greenwood, also of Gamma Pi, and writing the foreword is the 39th Grand Basileus of Omega Psi Phi Fraternity, Inc., Bro. Dr. Andrew Ray.

The book launch will take place from 7-9 p.m. It is open invitation. Here is the link. 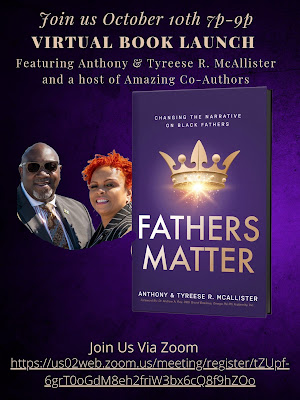 It is not an accident that Bro McAllister, as the book's lead author, is an Omega man. Omega Psi Phi Fraternity, Inc, has had a focus on Fatherhood and Mentoring in recent years including as a formal initiative. The Fraternity partnered with The White House on fatherhood and mentoring during the Administration of  President Barack Obama.

The McAllister's new book is just another part of their amazing resilient response in reaching out and giving hope and help to others after losing one of their two daughters, Ayana, to gun violence in Washington, D.C while she was a college freshman home for Spring Break in 2017. They have formed a foundation in her memory. For more information, visit the Ayana J. McAllister Legacy Foundation.

Below is an interview that Bro. McAllister recently provided to Gamma Pi News and Notes about his new book and the impetus for it. He and Bro. Greenwood and Bro Grand Dr. Ray were all interviewed about the book on Gamma Pi's "Community UPLIFT" television show early this year.

1. When is your book about Black fathers releasing? Tell us details about the launch?

The book is scheduled to be released on September 22.  Because of the current Covid climate, I am currently planning our virtual launch which will take place either the first or second Sunday in October. The event will take place via zoom platform and will be open to the public. This will be advertised on social media, and other social networks.

2. Tell us what the book is about and what inspired it.

This anthology is filled with stories from 18 African-American men talking about their plights on being black fathers, or having a phenomenal father or men in their lives. The inspiration behind this anthology came from the loss of my 18-year-old daughter in 2017, and during this time I was approached by many people often asking how my wife was doing. This was a normal and legitimate question, but I often felt lost and left out as no was asking how I was handling my daughter’s death. As my wife and I discussed this, she inspired me to take this opportunity to give voice to black fathers.  This is often the case when it comes to black fathers and I felt that this was an opportunity not only to give me voice, but to share the opportunity with men in my immediate circle.

3. How long did you work on the book?

From beginning to end this entire anthology project took a little over 12 months.

4. Who were your collaborators and what role did they play?

Each co-author contributed to the project by writing their separate chapters. This was truly a group effort, and it promises to be a game changer on changing the narrative on black fathers.

5. How does this book relate to Omega Psi Phi Fraternity’s focus on fathers?

We were honored and blessed that Dr. Andrew A. Ray, the 39th Grand Basileus of the Omega Psi Phi Fraternity Incorporated consented to write the foreword. Additionally, he penned a story in the anthology entitled “Male vs Manhood”.  Additionally, there are stories from four Omega Men in this Anthology.

6. What do you hope will be the outcome and impact of this work?

7. What do you think is often overlooked about Black fathers? Does your book address that?

I think there are several things that are often overlooked when one talks about the black father. The media will have us to believe that black fathers are not present, that we are not family oriented, and that we do not have the ability to openly love. In this anthology you will see men pouring out their hearts and sharing information on their plights on being Fathers. You will see men being vulnerable discussing issues on counseling and therapy, and giving homage to other black men that have poured into them and aiding them in being the men they are today.

8. What final thoughts and challenges do you want to leave with Black Fathers?

My final thoughts move me to a posture of gratitude and I want to thank each and every co-author that contributed to this anthology, as I know when one has an opportunity to read the pages of this book it will truly be a game changer. Lastly, I sincerely want to thank Bro. Grand Dr. Andrew A. Ray, who did not hesitate when I reached out and asked him to take part in this most important anthology. He also gave the charge to men in his chapter on the importance of knowing the difference of Male vs Man. He has been so gracious throughout this entire project and I am better having met and had the opportunity to discuss life with him. Please do us and yourself a favor and pick up your copy. The book can be purchased at www.anthonymcallister.com. Thank you so much Gamma Pi Chapter of Omega Psi Phi Fraternity , Inc. for supporting this most important effort. 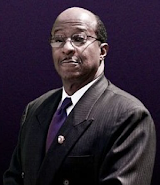 Posted by James Alexander at 9:42 PM