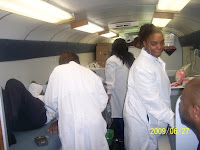 It was an interesting week leading up to Gamma Pi chapter's annual Blood Drive and Health Fair. The loss of two entertainment icons within hours of each other on the same day -- the incomparable music legend Michael Jackson and actress Farrah Fawcett -- underscored the importance of achieving and maintaining good health. Both were relatively young at 50 and 62. Those startling news headlines along with a growing sense of concern about personal health and well-being may have helped attract a large number of people from the surrounding community to Gamma Pi's Blood Drive and Health Fair today, held at the Kentland Community Center. A steady flow of people in and out the door kept staff hopping, from the teams who were manning various health screening stations to the American Red Cross crew receiving blood donations inside the mobile unit. 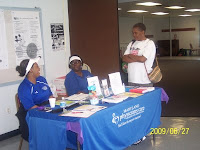 Imagine walking into a big department store (like Wal-Mart) and being able to go up and down the aisles and find everything you wanted. For example, up and down one long corridor, you could get screened for diabetes, bone density, glucose levels, cholesterol level and blood pressure. In another area, you could pick up useful information about health insurance, organ donation and nutrition. 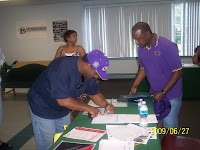 Gamma Pi members and physicians Brothers Dr. Lester Miles and Dr. Kevin Ford organized today's event as one of the chapter's ongoing Social Action projects. Bro. Dr. Ford ran the successful event on-site.
While Gamma Pi works throughout the year with youth, families and seniors in the Prince George's community, the chapter is looking to increase its work in the area of health awareness and education, given the impact of health disparities on African Americans and other minority populations. You can learn more about health prevention and health disparities by visiting the National Institutes of Health.

Posted by James Alexander at 7:34 PM