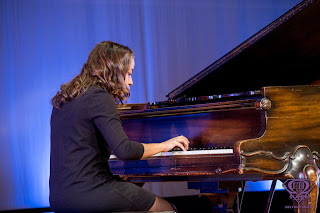 It was hard to drive past Charles Flowers High School in Springdale on Saturday, March 17, and not feel compelled to stop in. The bopping sounds of jazz saxophones, concert pianos, high-pitched and guttural low vocals along with the whoosh of dance routines transformed the school into a mini-version of Amateur Night at the Apollo. That was the best way to describe Gamma Pi's successful Talent Hunt '18.

It was a good turnout at the school auditorium as the crowd got into it from being presented a really good show. A a total of 18 contestants fought it out for category prizes as well as the top overall prize that would send them to the District Talent Hunt competition in Baltimore in late April. The opt overall winner was Nia Harris Burnley, a senior at Bishop McNamara High School who  performed a classical selection on piano, "Moonlight Sonata Movement 3," by Beethoven. Several other students placed in individual categories such as Dance, Contemporary Piano, Classical Vocals and  Contemporary Instrumental among others. 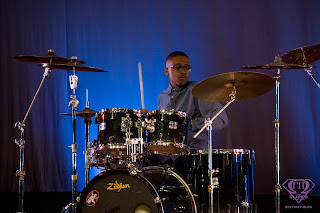 The show opened in a bold way with a bellowing opera-like booming bass solo  by 10th grader  Solomon Ouyukwu, of Flowers, who sang a classical piece, O Cessated di Piagrami by Scarlatti. It ended with raucous drum solo by Immanuel Cooper, an 11th grader who is also a student at Flowers. Both performers brought down the house.

People know good talent when they see it, or hear it, which is why they clapped and cheered for jazzy saxophone solos and piano concertos, all with the same fervor. It is why they were awed by both rhythmic dance moves to a spiritual classic and the the sounds of thunderous drum solos.


Posted by James Alexander at 11:36 PM No comments:

Brothers Meet with State Legislators in Visit to Maryland Capital 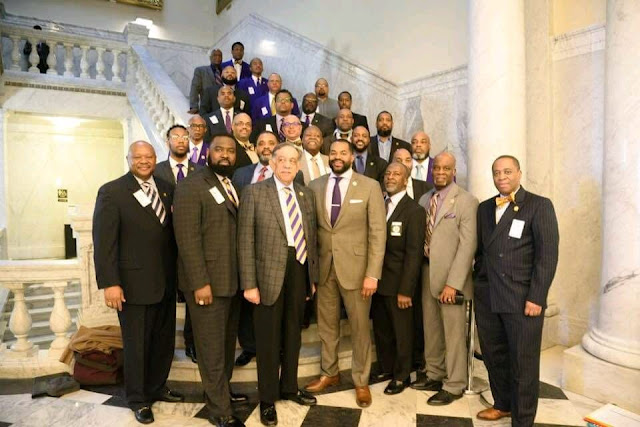 Omega men are known for taking charge and going where the action is. The Brothers of Gamma Pi did just that recently by hosting other Second District chapters for an issues-focused visit to the State Legislature. The Annual “Ques in Annapolis” meeting brings together chapter members and lawmakers, giving concerned Omega men an opportunity to come face-to-face with state leaders to talk about progress in initiatives that impact citizens in the communities where Gamma Pi and other chapters serve.

More than 90 Omega men participated in the daylong program including 35th Second District Representative Bro. Sherman Charles. About one third of those in attendance were from Gamma Pi, said Legislative Co-Chair Brother Richard W. Allison II, wh organized the event. During the day, the contingent of Omegas visited both the House and Senate chambers and they got in a tour of the historic State House building.

“This event planted the seeds of a vision throughout the District.  A vision where we can begin to personalize our relationships as Chapters with State Legislators in an effort to facilitate social action change,” said Bro. Allison. “A vision that will allow us to leverage our size and reach to impact positive change in our communities.“

The day’s activities also included sitting in on a live committee meeting, touring the Governor’s Mansion, and for Brothers, two especially meaningful activities: lunching at the Asbury United Methodist Church, the oldest African American church in Annapolis and one the pastorate of Brother Founder Bishop Edgar A. Love; and visiting Gamma Pi Chapter member and State Senator Bro. Ulyssess Currie.

Speaking of Bro Currie, it was announced that he and another Omega man in the legislature, Bro. Frank S. Turner, will be the namesakes for two new awards to be presented annually. They were both inaugural recipients of these new awards during the Ques in Annapolis activities. It was a great day to be an Omega man. The Founders would have been extremely proud.
Posted by James Alexander at 8:44 PM No comments:

Gamma Pi's Social Action team is continuing to chart new territory for service and Uplift  in the local community. In just the past month, Social Action, under the leadership of Brother Kevin Greenwood, has met with local domestic violence advocates, re-introduced its reformatted Que Kidz initiative in two local communities and sponsored a birthday party for seniors in Suitland and sponsored a basketball skills event in conjunction with March Madness for local youths in the underserved Columbia Road community.

On Saturday, March 17, Social Action members attended“Momentum: Breaking the Silence of Domestic Violence Promoting Domestic Peace”, a Men's Conference sponsored by the Prince George’s County Department of Family Services The conference was held at the Camelot by Martin’s in Upper Marlboro and was designed to create a gender specific community dialogue to educate men and youth on healthy relationships, non-violence, and to give them an opportunity to partner with other males in discussion to address domestic violence in Prince George’s County. It was the third conference Gamma Pi has participated in since 2017. The chapter is looking to make inroads at these conferences to lay the groundwork for collaborative social action in that space.

On Saturday, March 24, the day of the largest event of the year for Gamma Pi -- the day of the annual Mardi Gras -- The Super Chapter put on two big events for youth under its Que Kidz moniker. In the morning, the Brothers joined local Fraternity member and high school basketball coach Bro. Rod Garner in holding a March Madness session on on-court fundamentals with lessons on life sprinkled in. The skills sessions dove-tailed with the televised NCAA college basketball tournament. It proved to be a fun and exciting way for kids to learn the importance of teamwork, developing life skills and understanding and practicing sportsmanship. The event was held at the Columbia Park Recreation Center in an underserved area of Prince George's County.

That evening, just hours before the Mardi Gras at National Harbor, the Social Action Committee went into another hard-hit community, Seat Pleasant, to host a Que Teenz event  that was designed to help kids learn about good character. The purpose of this session was to introduce the Que Teenz to the concept of Character Education through dialogue.

Gamma Pi Chapter finished up the latest Social Action run by hosting the Quarterly Birthday Bash for the seniors at the Windsor Crossing Apartments in Suitland, Md., bringing cake and ice cream, party favors, gifts, singing and a whole lot of love and respect to the seniors who always look forward to a visit from "The Ques" and those exciting birthday parties!

"We're just here to serve in as many ways as we can," said Bro. Greenwood, who leads the committee. "Every project is a part of our commitment to Uplift."
Posted by James Alexander at 8:43 PM No comments: